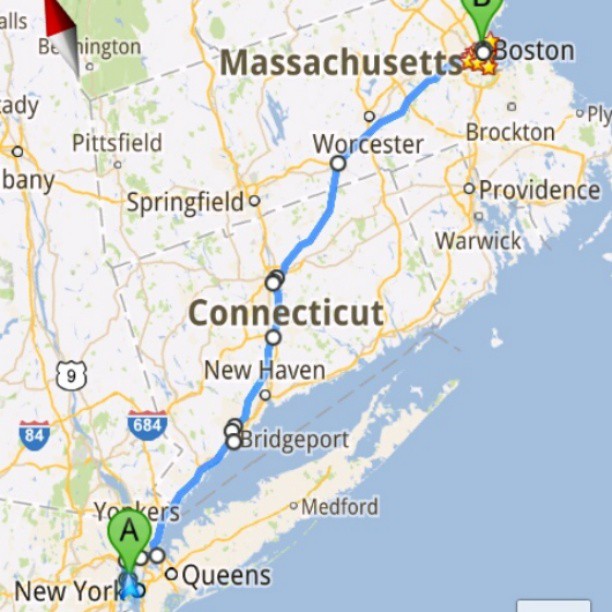 With Memorial Day 2014 approaching, I felt the need to write about last year’s less-than-epic MDW trip to Boston. Memorial Day Weekend is a holiday meant to celebrate ‘Merican heroes and inaugurate the summer, so we thought we’d show our patriotism by celebrating in the one of the oldest and most historically rich cities in America. Being the novice travelers that we were at the time, we didn’t make any specific plans for the 3-day trip. We just left our Yankee caps at home and set out with nothing but a list of bars and restaurants to check out.

From NYC, Boston is supposed to be a relatively short ride – about 4 hours. However, as soon as we hit the road, we encountered an enemy that would stop at nothing to sabotage our plans for the weekend. It started with just a few drops smacking the windshield; then as soon as we crossed into Connecticut we were met with an unrelenting downpour that delayed our arrival and set the ill-omened forecast for the rest of the trip.

Drenched and weary, we arrived at the Boxer Hotel on Merrimac Street and our spirits were immediately turned around. The hotel’s charming ambiance was a warm welcome from the turbulent weather outside, and the staff made us feel perfectly at home… even after they saw our IDs. We quickly settled into our accommodation and got ourselves ready for the first night out in Boston, determined not to let the rain slow us down.

We started off at the Tip Tap Room on Cambridge and Staniford St. for dinner and drinks. With its huge selection of beers on tap and an extensive, interesting menu, this was one of our favorite stops in Boston. The amount of beers to choose from at this place was staggering. Usually when faced with such a dilemma, it may seem like a good idea to find something familiar and stick to it. On the other hand, I’ve found it much more exciting to look for the weirdest, most interesting name on the list and go for that. Thus, I ended up enjoying a Weihenstephaner alongside my Lamb Burger and it was one of the best meals of the weekend. I’m sorry I don’t have any pictures to back these claims but know that my recommendation is essentially a guarantee – the Tip Tap Room was awesome!

After dinner we took off in search of more bars and debauchery. The rain was still coming down hard and we were about to learn a serious lesson about Boston – its nightlife cannot be compared to New York City. The bars here close ridiculously early so you need to head out around dusk if you want to make the most of the night. With our late start we were only able to sample a few bars: most notably, The Bell in Hand Tavern, “America’s Oldest Tavern” established in 1795, which, probably because of the monsoon, was less than impressive even with the accolade of having a drink at the oldest bar in America. 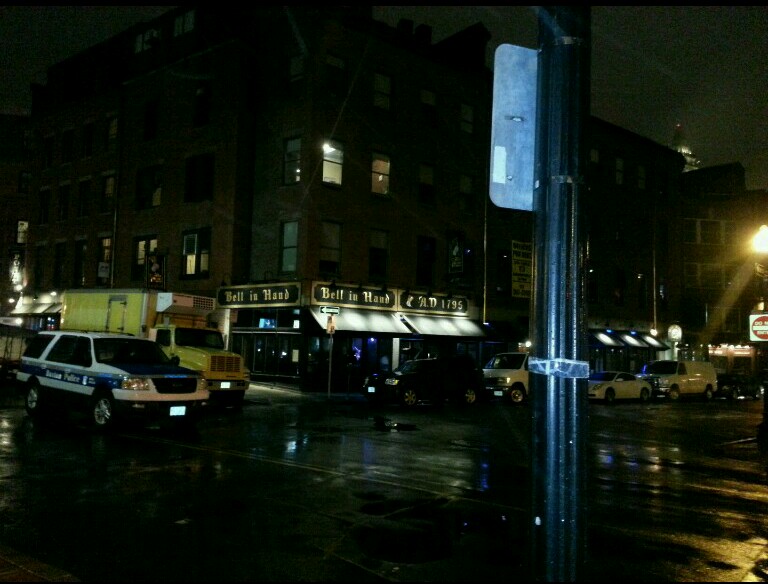 After a few failed attempts to find a bar strong enough to weather the storm, we cut our losses for the evening and headed back to the Tip Tap Room to make last call. There we met some local Bostonians who invited us back their apartment to chill and listen to some music. It was a smooth end to a shaky, waterlogged night.

Our first morning in Boston; the rain had lessened to a light drizzle but the menacing clouds still loomed over the city. No longer worried about drowning right outside the hotel, we made our way downtown with hopes of getting on a boat. From Long Wharf, we got tickets aboard Boston Harbor Cruises’ USS Constitution Cruise which took us on a 45-minute tour around the inner harbor and up to the Charlestown Naval Yard. 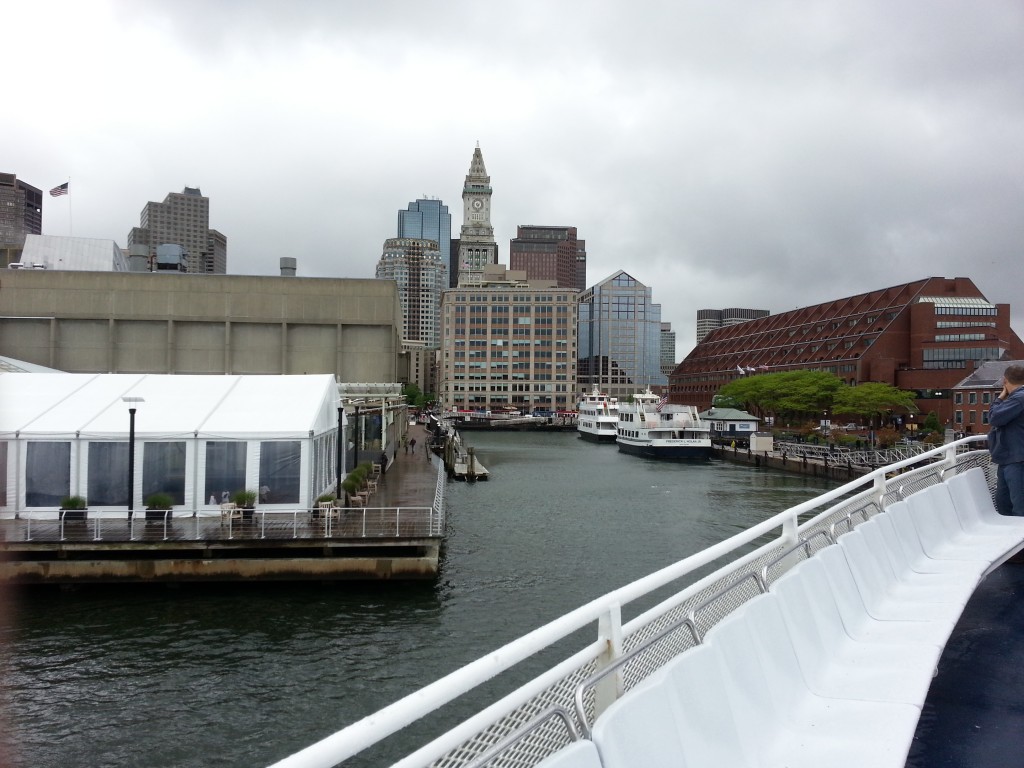 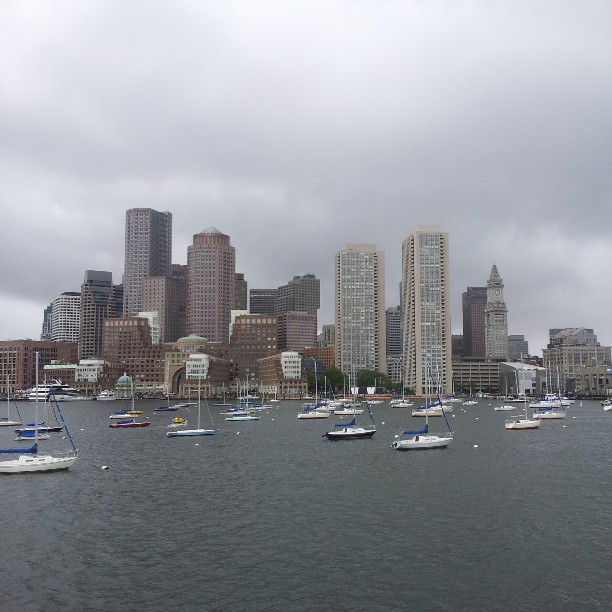 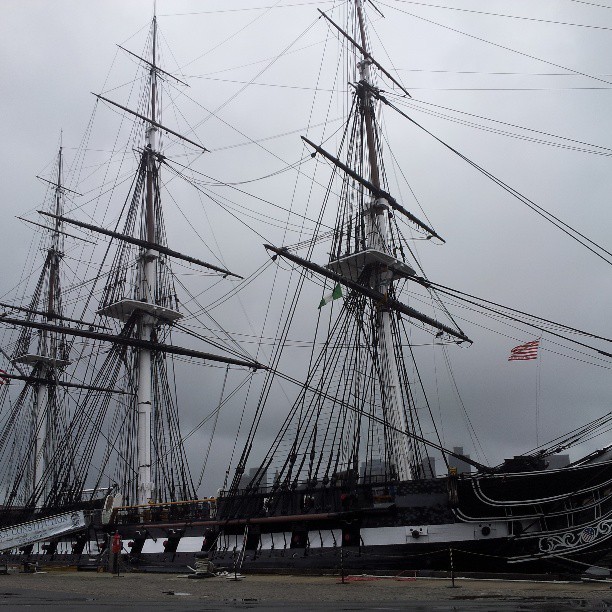 There, we were allowed to disembark and explore Charlestown and the Bunker Hill Monument via the Freedom Trail. Though the FT is very clearly marked by a long, bright red trail running along the sidewalk, we still somehow managed to get lost while wandering through Charlestown. I admit that I was more interested in catching a real live bank robbery than any of the historical landmarks along the Freedom Trail, and that may be why we ended up doing circles around the neighborhood but still making it back to the yard just in time to catch a ride back to Long Wharf. 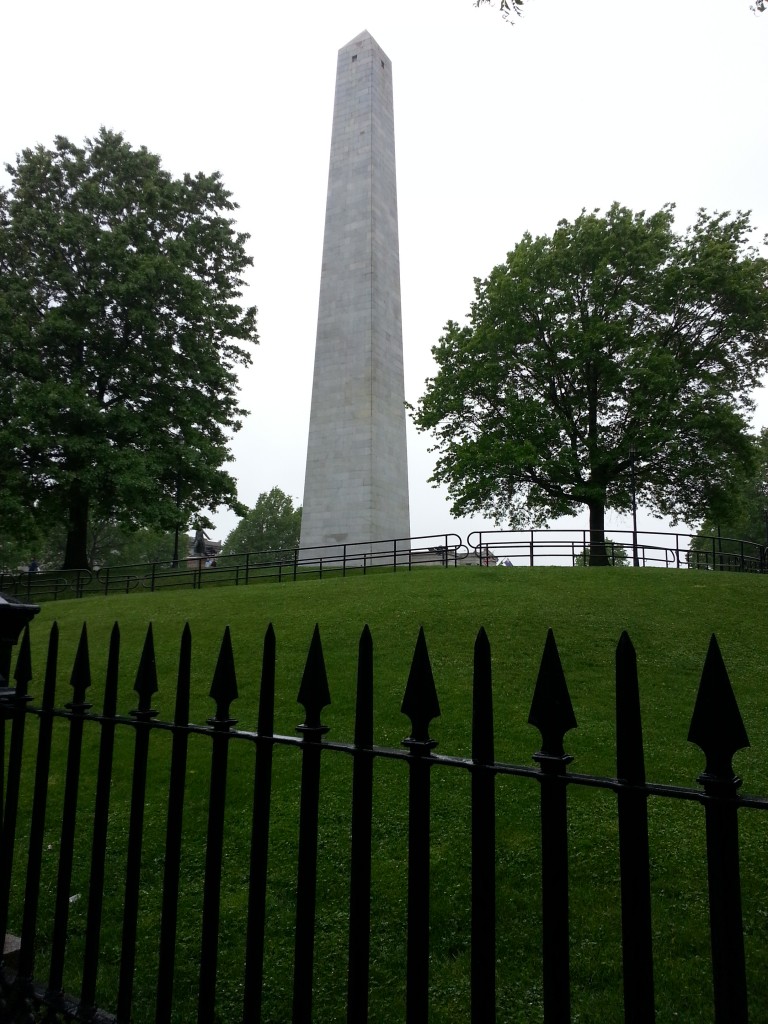 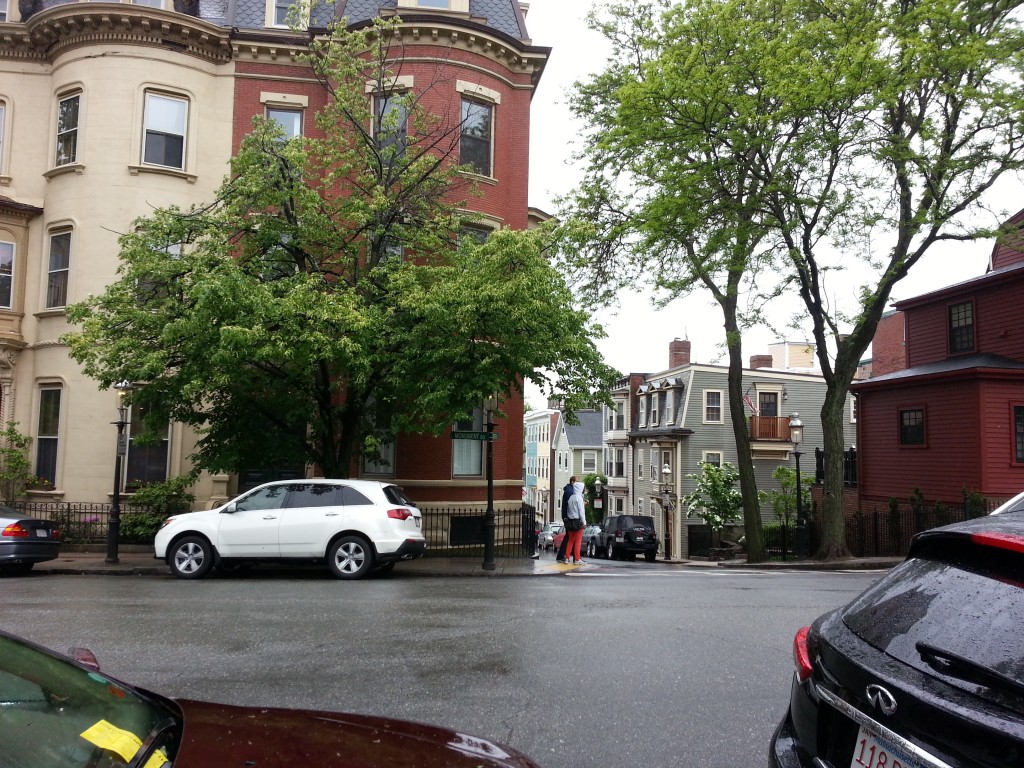 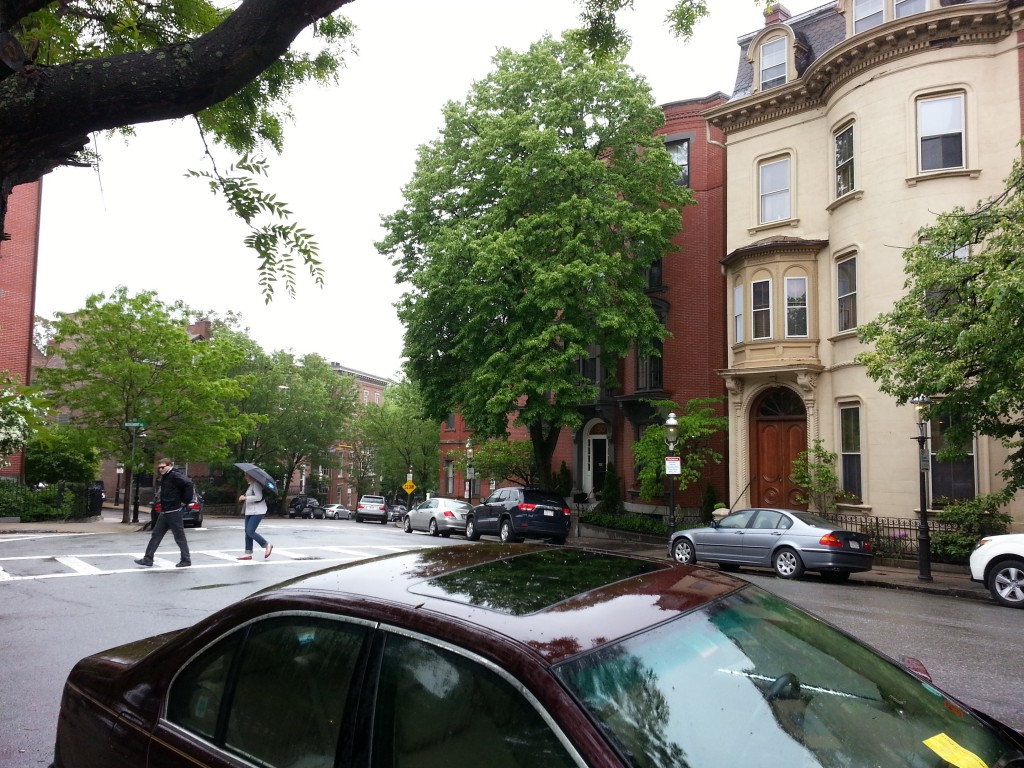 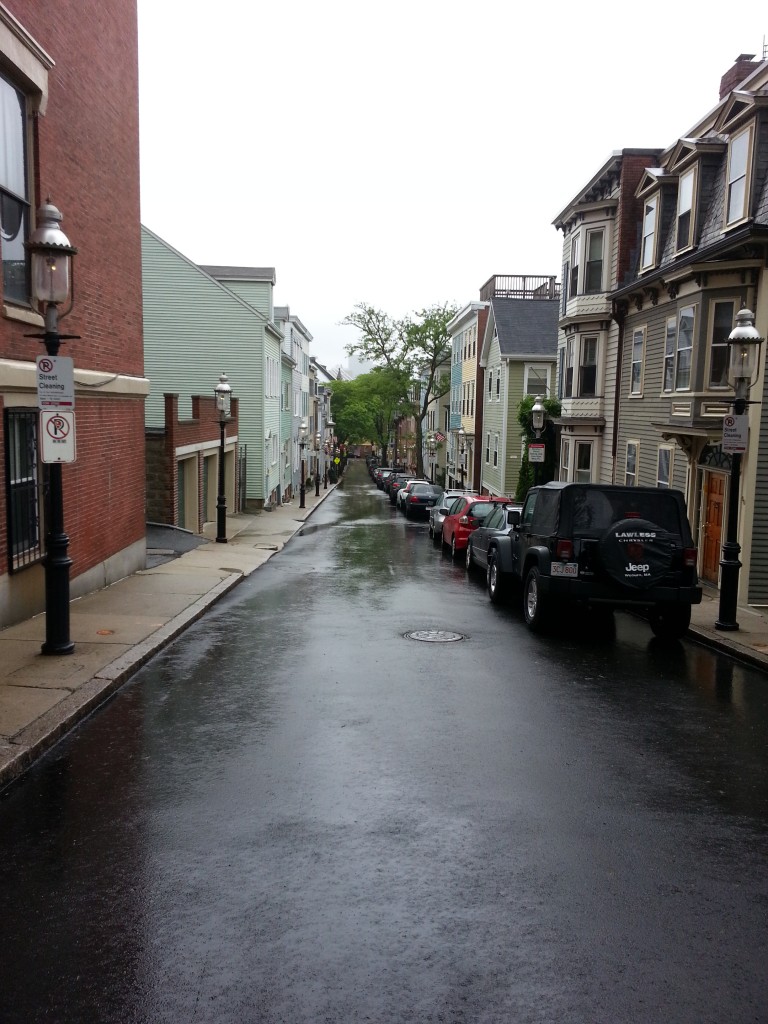 After the Harbor Cruise we headed over to the New England Aquarium which didn’t have any sharks so it was essentially a waste of time. However, if you enjoy seeing inferior species swim around in a tank, then check it out. We, on the other hand, prefer our sea animals deep fried with a wedge of lemon so we made our way to Faneuil Hall for lunch. The promenade was pleasantly alive with people buzzing in and out of the infinite hive of stores and restaurants. We chose Anthem Kitchen & Grill for lunch and gorged on hearty and delicious grilled cheese sandwiches and soup. Again, sorry for the lack of pics but the food was gone long before either of us thought to take photo. Just take our word for it and head over to Anthem for some delicious that’ll sedate a grown man for at least a few hours.

Waking up from our food comas right before sunset, it was time for us to start the night. Our first stop of the evening was Kingston Station for dinner. If you’re looking for an elegant, sophisticated dining experience in Boston then this is the place you need to visit. The chic décor and refined menu make this a great date-night or power-lunch setting. Had I not still been completely stuffed from lunch, I would have been all over that menu; but in order to keep my shirt buttons from popping off, I stuck to the mussels cooked in a vermouth and white wine broth and I was blown away.

Next, we took the party over to Mojitos Latin Lounge to show off our mean salsa skills to all the ladies of Boston. After double-fisting some LITs and busting out some sick moves on the dance floor, the rest of the night got lost in a drunken blur. As a gentleman, all I can say is that Zain and I got split up and we each had some pretty interesting stories when we got back to the hotel. Though Mojitos was nothing to brag about, the night turned out to be awesome for us both.

As is usual on a Sunday, we woke with extreme hangovers and profound exhaustion. There was only one thing I could think of to assuage our ailments: lobster rolls! We checked out of the hotel, loaded up the car, and raced over to Belle Isle Seafood in Winthrop, MA. After seeing this place on Anthony Bourdain’s “No Reservations,” I made this a mandatory stop on the Boston agenda. Resting right on the water, Belle Isle sets a high standard for fresh, delicious seafood. The lobster rolls were massive and the clam chowda’ was unlike anything I’ve ever had! It was perhaps my most memorable meal of the trip… so memorable that I actually took a picture of it! 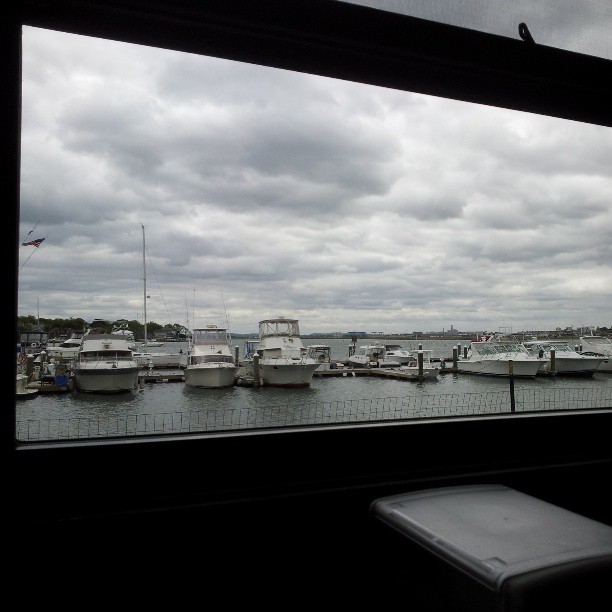 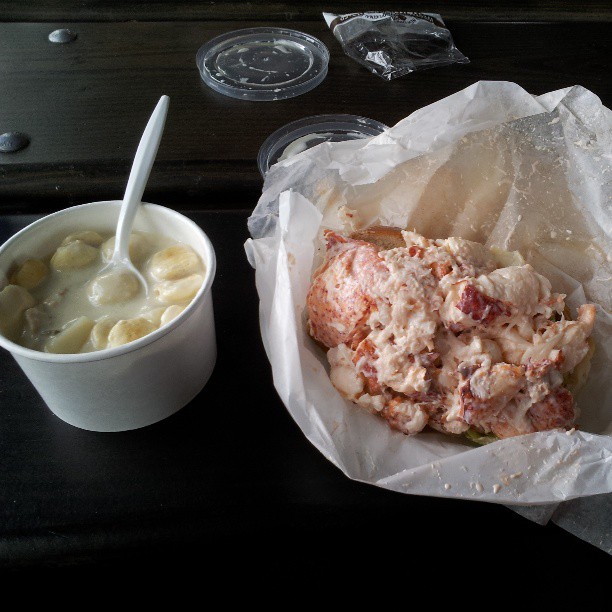 … and ALL THIS LOBSTER!

Before returning to Boston, we decided to explore Winthrop and ended up at Deer Island Park. It was the perfect place to burn off the calories with some easy trails and spectacular views of the city. Afterward we drove back to Boston in an attempt to try a few more bars or find anything fun to do. We checked out a few spots along the waterfront and tried to navigate the nauseating madness that is Boston’s road infrastructure, but ultimately failed to keep ourselves entertained. Unsatisfied and disillusioned, we finally gave up on finding fun in Boston and hit the road anxious to get back to New Jersey. 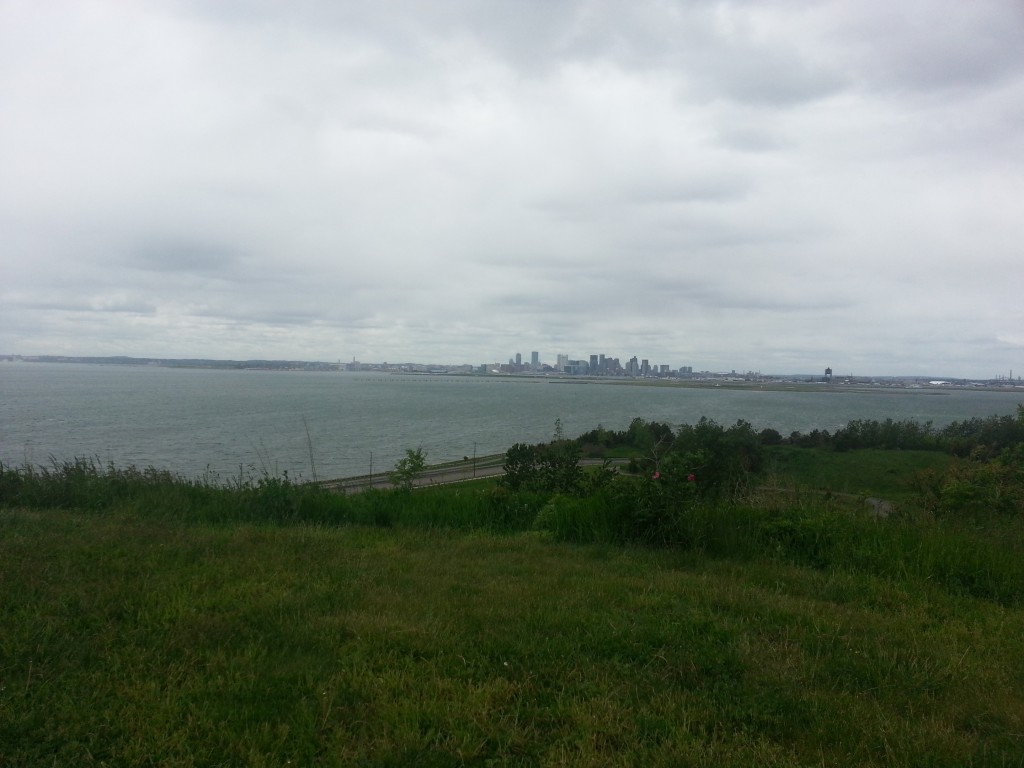 Neither of us made it out of Boston unscathed. The dreadful weather severely impacted the attitude and energy of the city, and it made for a less-than-impressive adventure. Nonetheless, I am absolutely positive that Boston has so much more to offer than the little terrors that I experienced and I’m still fully determined to give the city another try some time in the future, once the wounds have healed.

In the meantime, I’ll focus on what I do actually appreciate about Boston. For one, I love the pride that Bostonians have for their city – it’s unlike anything I’ve ever seen, even in New York where “pride” is often mistaken for unabashed arrogance and gross entitlement. Bostonians are proud of their city. New Yorkers are just proud of themselves for living in New York. If you look closely, there’s a difference. Maybe the secret to enjoying Boston, or any city for that matter, is to treat it and love it for what it is and realize that it’s a waste of time to ever try making comparisons. LA is LA; Chicago is Chicago; NYC is NYC; and Boston is Boston. Each has its own history, its own identity, and its own place in our hearts. With that said, Boston, the next time we’re in town, you better not hold back.