On Saturday morning we woke up in Portland, Maine; dazed, confused, and wondering if what we’d seen the night before was real life or just some crazy hallucination sparked by the cool New England air.

Having arrived on Friday close to midnight, we were left with very few nightlife options because, for some reason I still don’t understand, last call in Maine is at 1 AM – not kidding. Our search for  some last-minute drinks and trouble took us to PT’s Showclub which was, quite literally, a freakshow of swallowed swords, queefed darts, and other sights I’d prefer to forget.

So for our first full day in Portland, we had two things in mind: an epic breakfast and an awesome adventure! To fuel up, we went over to Bintliff’s American Cafe for what might have been the greatest breakfast of my life. We knew this was going to be good when we arrived and saw a long line of people standing outside waiting to be seated. Luckily, to quell the inherent cruelty of a 45-minute wait, you can help yourself to a cup of coffee while staring enviously at those lucky enough to have scored a table before you. 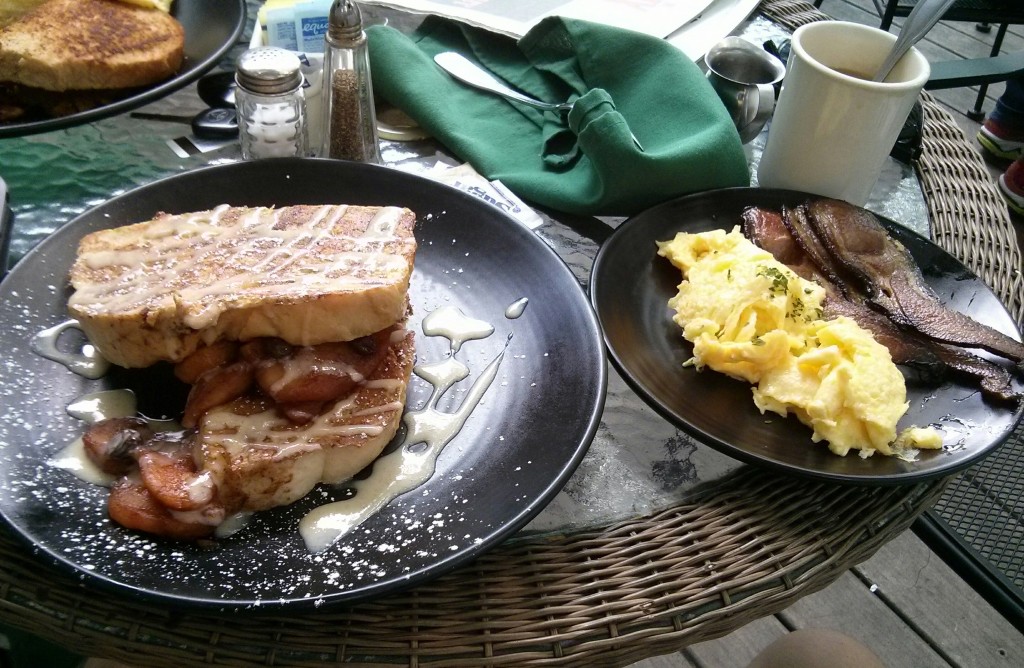 While this spot definitely tested our patience, it proved that good things come to those who wait. The Apple Cinnamon Raisin Stuffed French Toast was a legendary dining experience that I haven’t been able to stop thinking about!

Stuffed with glory, we were ready for some classic New England adventuring so we decided on a quick road trip up historic Route 1. Following the majestically scenic coastline of Maine and passing through charming little towns, picturesque seaports and stunning waterfronts, this is a drive that should be on every explorer’s bucket list. 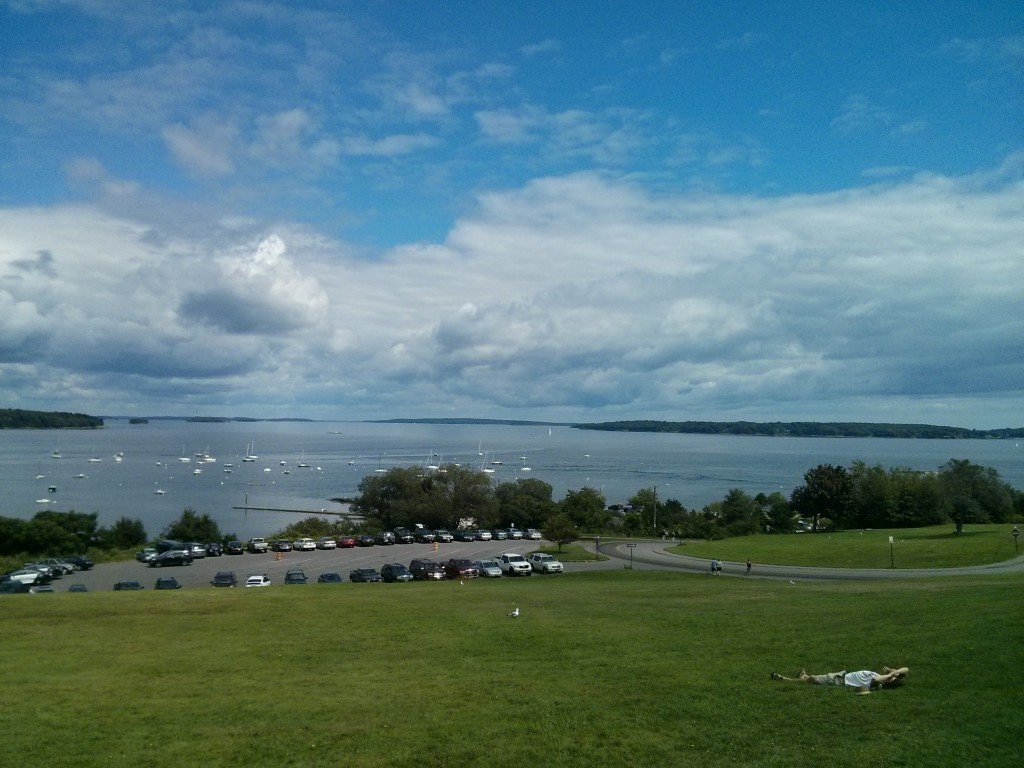 After traveling up Highway 1 past Brunswick, through Rockland, and up to Penobscot Bay, we finally stopped at Camden Hills State Park for a trip to the top of Mt. Battie. Though the park offers several miles of hiking trails, we were still feeling a little sluggish from breakfast, so we opted to drive up to the mountain’s 800 ft. summit. From the top we were treated to a magnificently sweeping view of Camden Harbor and Penobscot Bay! The day was so clear and glorious that we could even see Cadillac Mountain in Acadia National Park resting in the distance! Our adventures at Acadia were some of the best we’ve ever had and it was incredible to know that Bar Harbor was right there just beyond the horizon, awaiting our return. 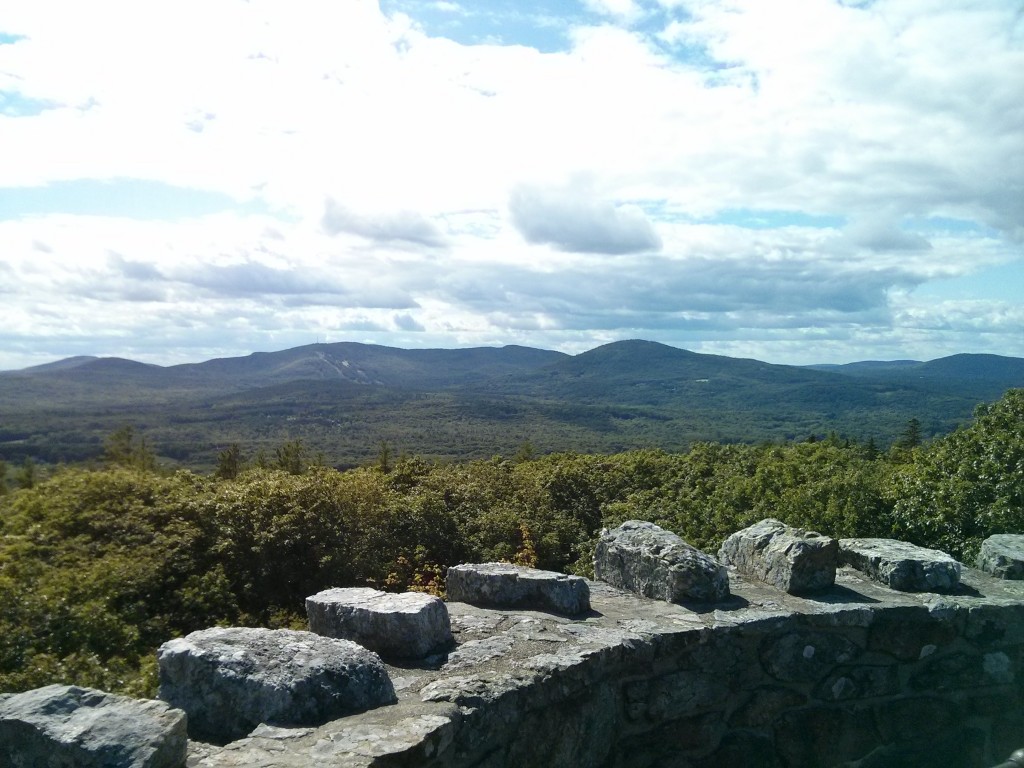 Finally it was time for lunch; and when you’re in Maine, lunch calls for one thing and one thing only – lobster! We decided to forgo the yelp reviews and internet recommendations and instead just drive around the quaint towns of Maine until we found a place we couldn’t pass up on. Right on Route 1 in Linconville Beach, we found McLaughlins Lobster Shack and immediately knew that we were going to love it. The restaurant featured cool maritime decor and spacious outdoor seating right on the shore with awesome views of the harbor. 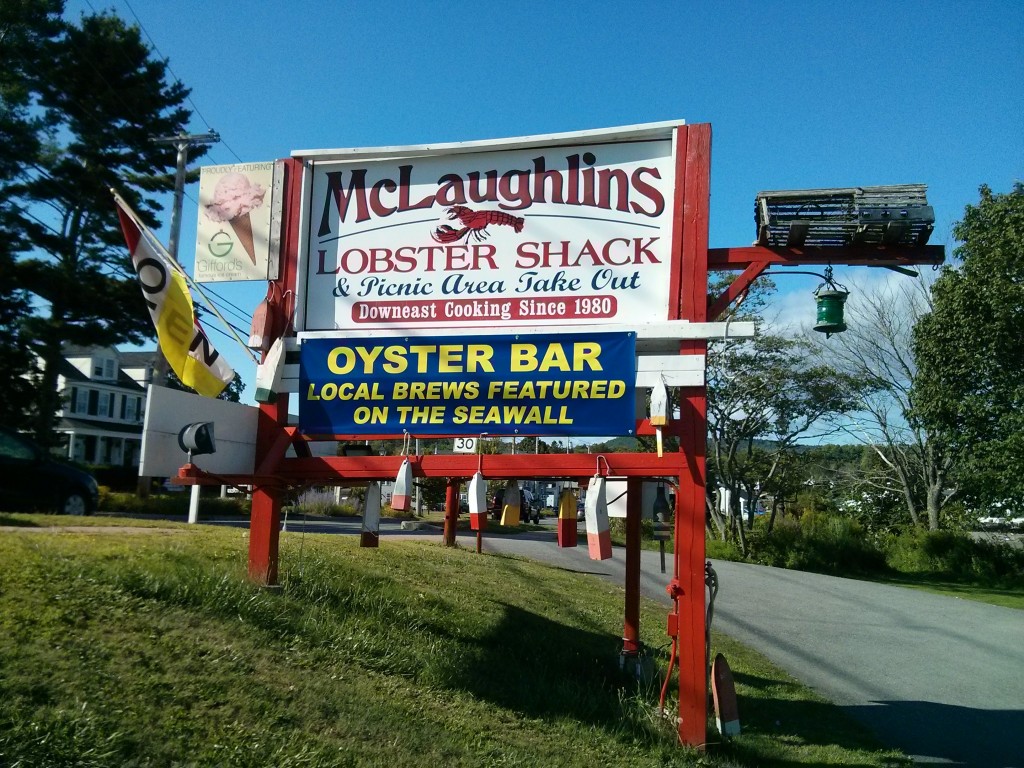 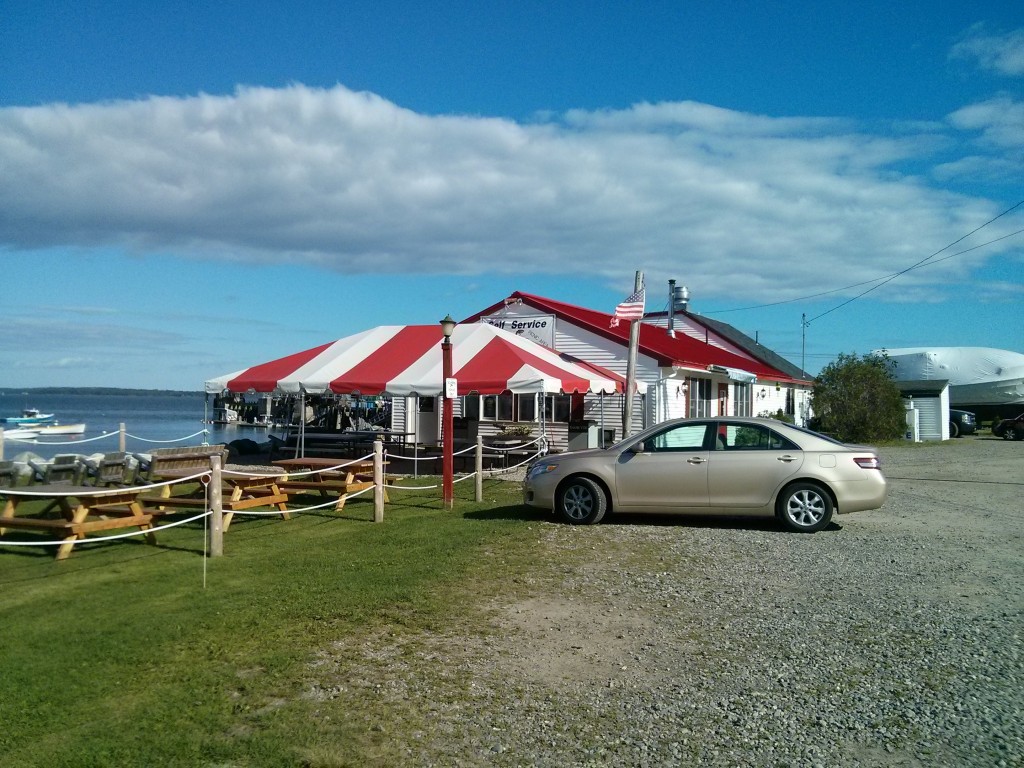 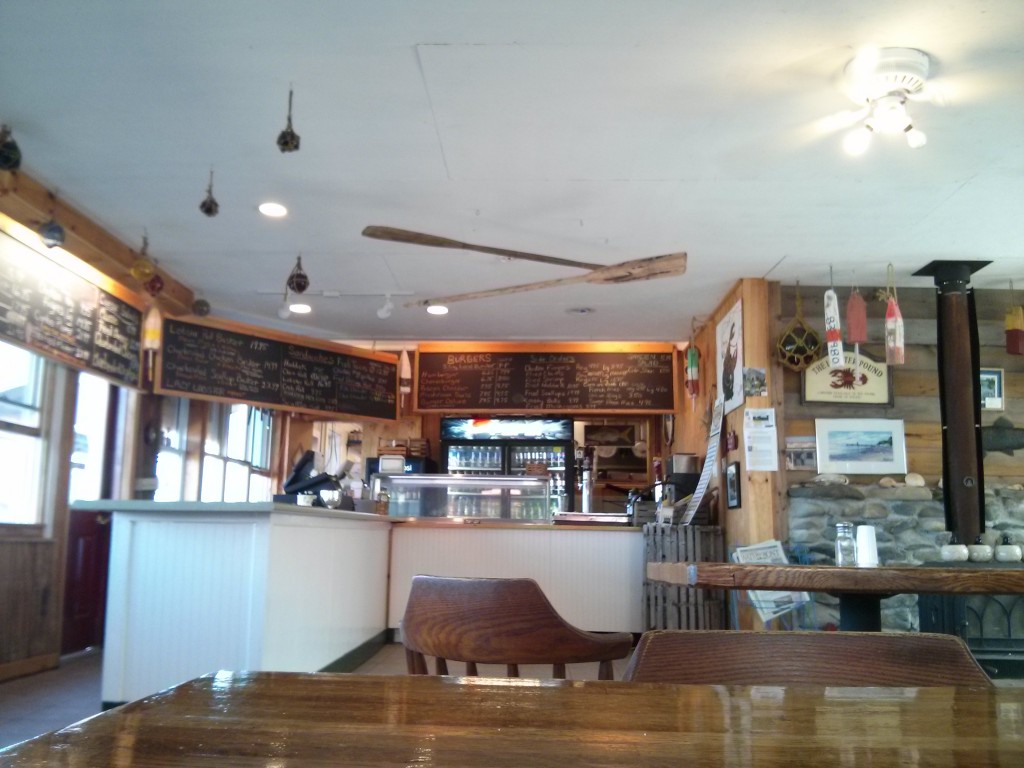 There really is nothing like sitting outside, devouring a fresh, delicious lobster roll and fried clam strips while taking in the the spectacular views of the bay! This meal was truly the quintessential Maine dining experience that everyone needs to try. 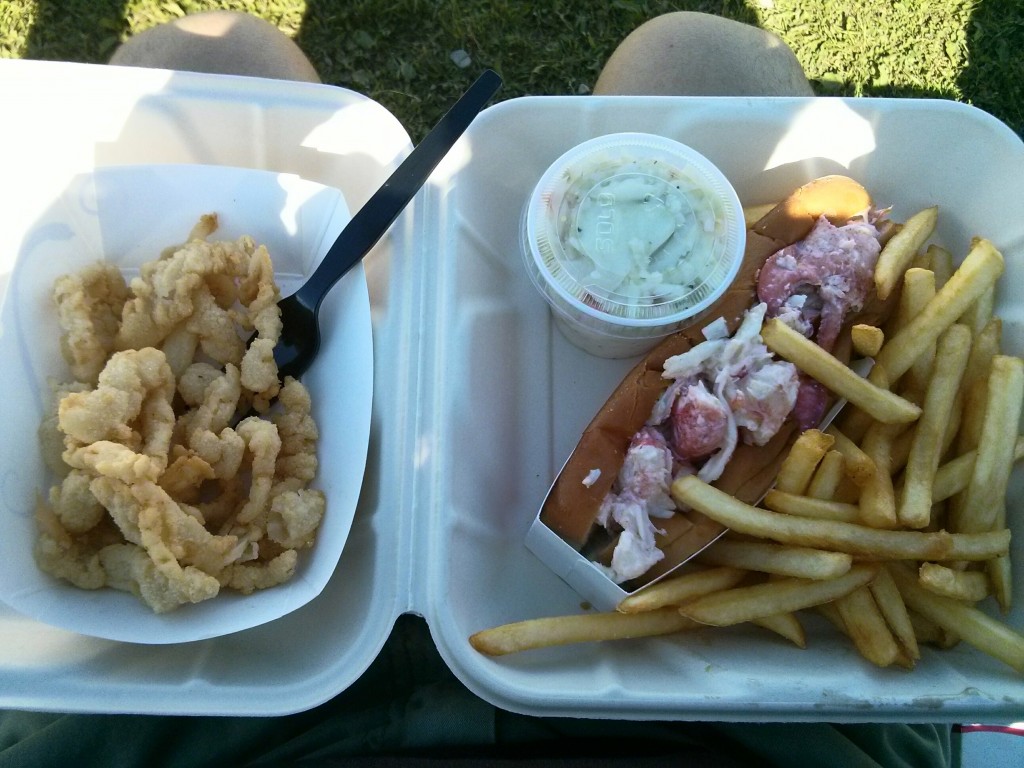 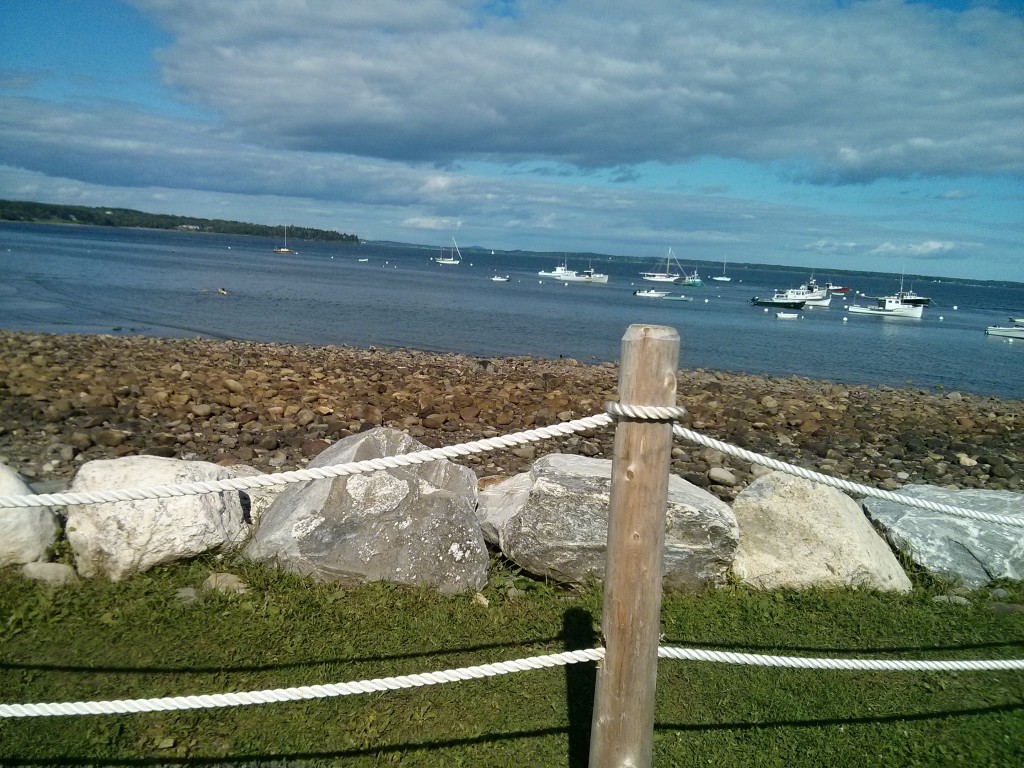 We made in back to Portland just before sunset, ready to hit the bars and see what the nightlife on Wharf Street is all about. Now aware of Maine’s ridiculously early last call (remember, 1 AM!), we knew we had only a few short hours to get trashed and have an epic night. We started at Pearl Lounge where some surprisingly hot bartenders kept the beers and shots flowing! In the room next door they have a sizable dance floor which got packed despite the DJ’s antiquated set list. With the very limited nightlife options in Portland – and that God forsaken 1 AM last call! – every spot on Wharf Street was bustling with rowdy bros and sloppy chicks all looking to wild.

After the 100th-or-so shot of whisky, the rest of the night became a blur of random bars, cobbled streets and lots of drunk eating. I do remember checking out Fore Play Sports Bar after a few of the locals recommended it to us. We also hit up Oasis for some drunk dancing that I really have no recollection of. I also got kicked out of Bar of Chocolate for being too wasted – which is unfortunate because the name alone makes it a place I’d really like to check out.

After the bars we munched out on hot dogs and tater tots at Blue Ribbon Food Company, followed by a massive, disgustingly beautiful burger at Elevation. I also remember going in at a taco truck on Wharf and Dana Street but I don’t remember what it was called – if you see it on the corner, make sure you try it!

Luckily, the next morning we awoke without hangover and so our mission was to end up on a boat – because when you’re in Maine you do two things: you eat lobster and you get on a boat (and if you’re really badass you eat lobster on a boat). Unfortunately, budget cuts kept us from being too badass so we had to settle for breakfast on the mainland at Becky’s Diner. A Portland landmark, Becky’s was packed this morning, and for good reason. 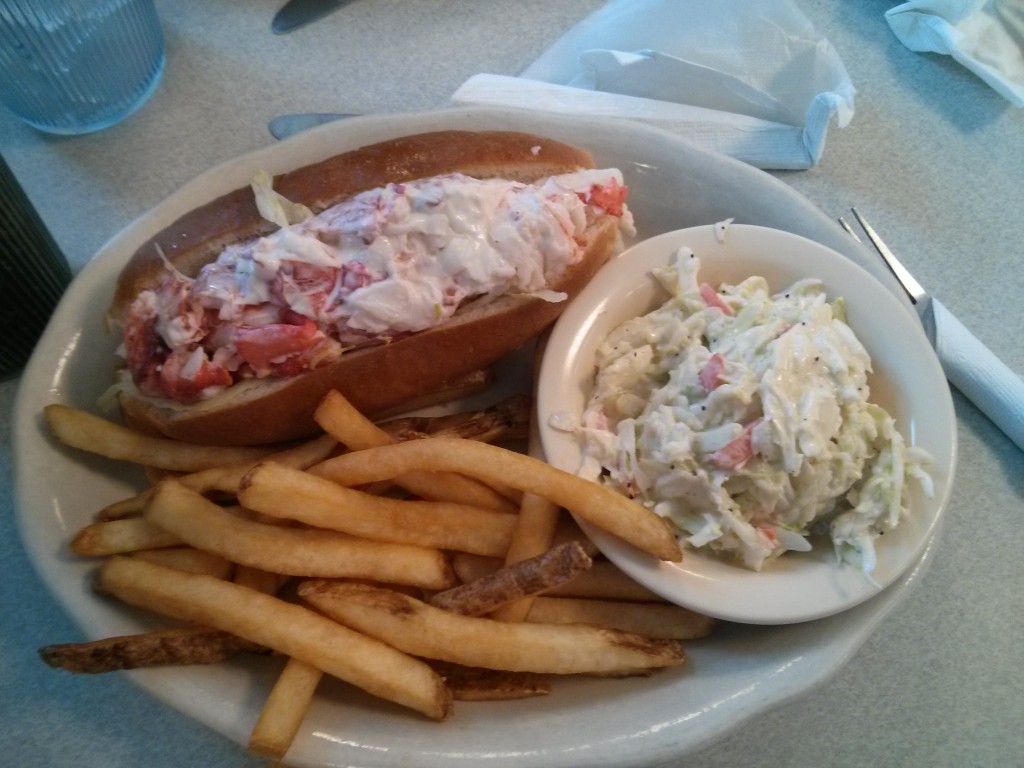 The menu had all of your typical diner classics but we had to go with the lobster rolls, because Maine. Though it was quite massive, it sadly was not the revelation we experienced at McLaughlin’s; nonetheless it kept us fueled for the rest of the day! 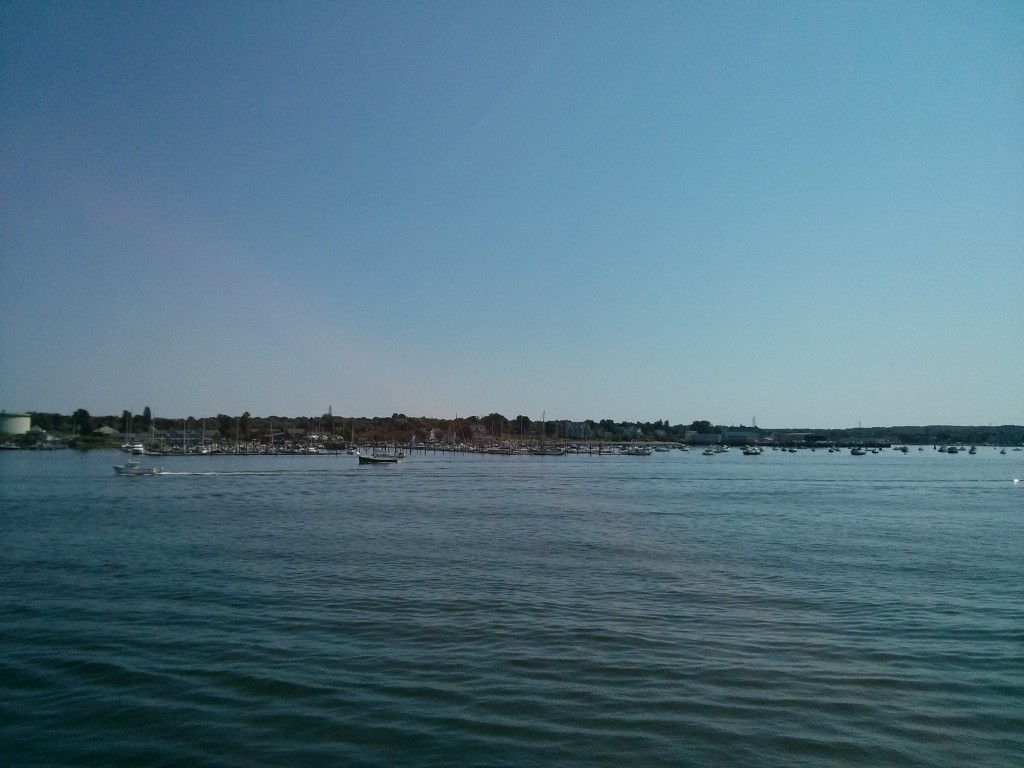 Next, we hopped on the ferry and made our way to Peaks Island. One of over 200 islands in Casco Bay, Peaks is an extremely popular summer destination for tourists and residents of Portland. The island is home to an array of restaurants, private beaches, and magnificent views of the bay from any wherever you’re standing. 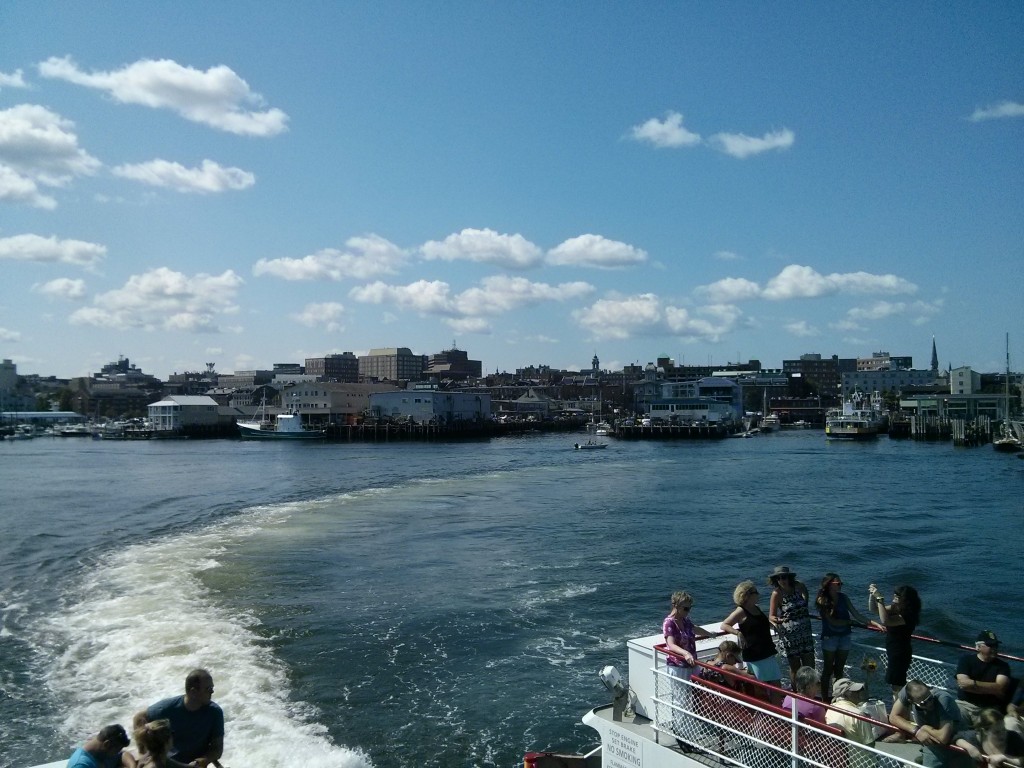 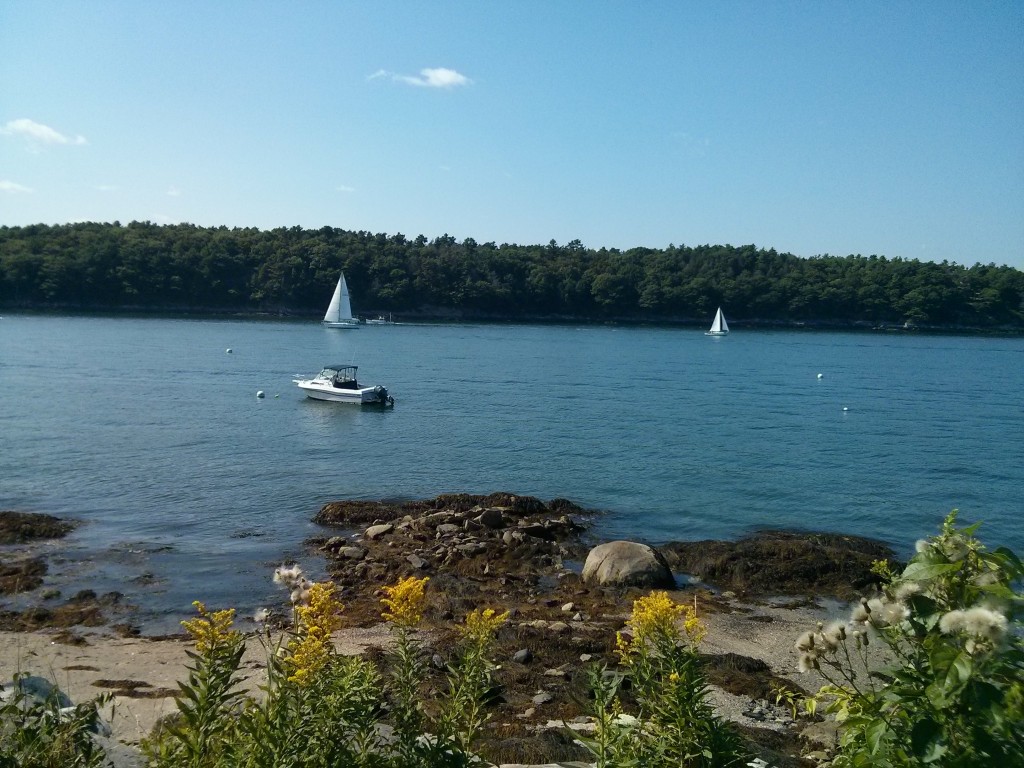 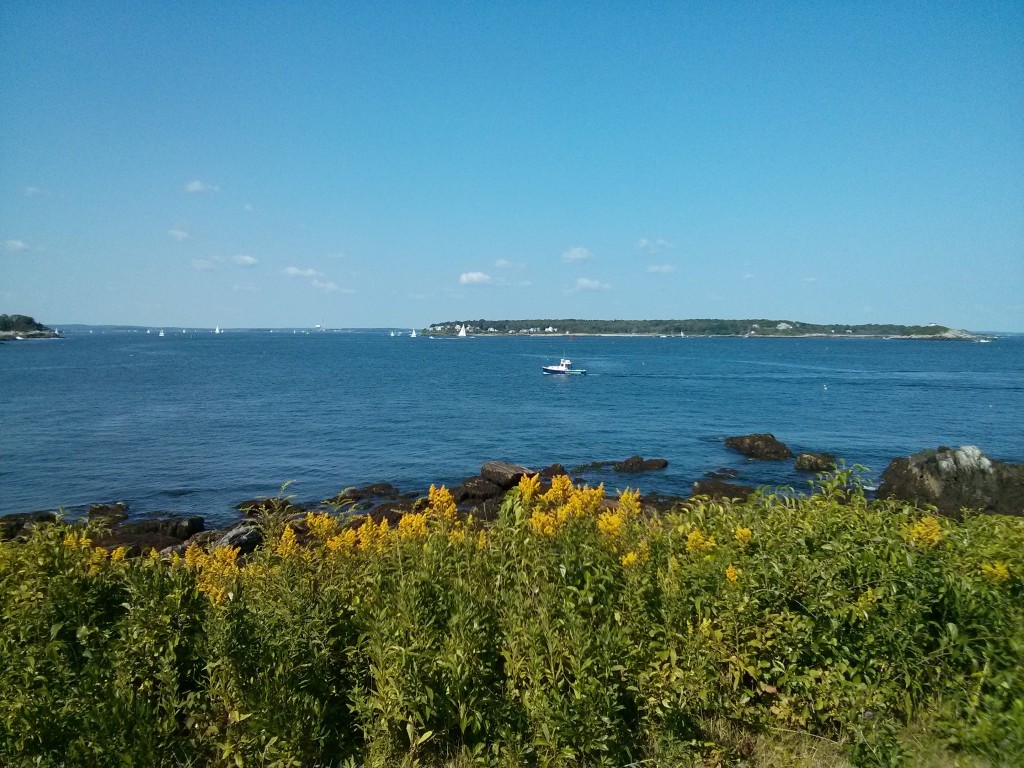 We chose to rent a pair of bikes from Brad and Wyatt’s Bike Shop and give ourselves a tour of the island. At a steady pace, you can do a lap around the island in under an hour, but our multiple stops to take in the many spectacular views made the trip a little longer. Either way, this was the most awesome way to end the summer! I can’t remember the last time I’d ridden a bicycle, so the nostalgia paired with the cool breeze and the incredible scenery made this an experience that I’ll never forget! 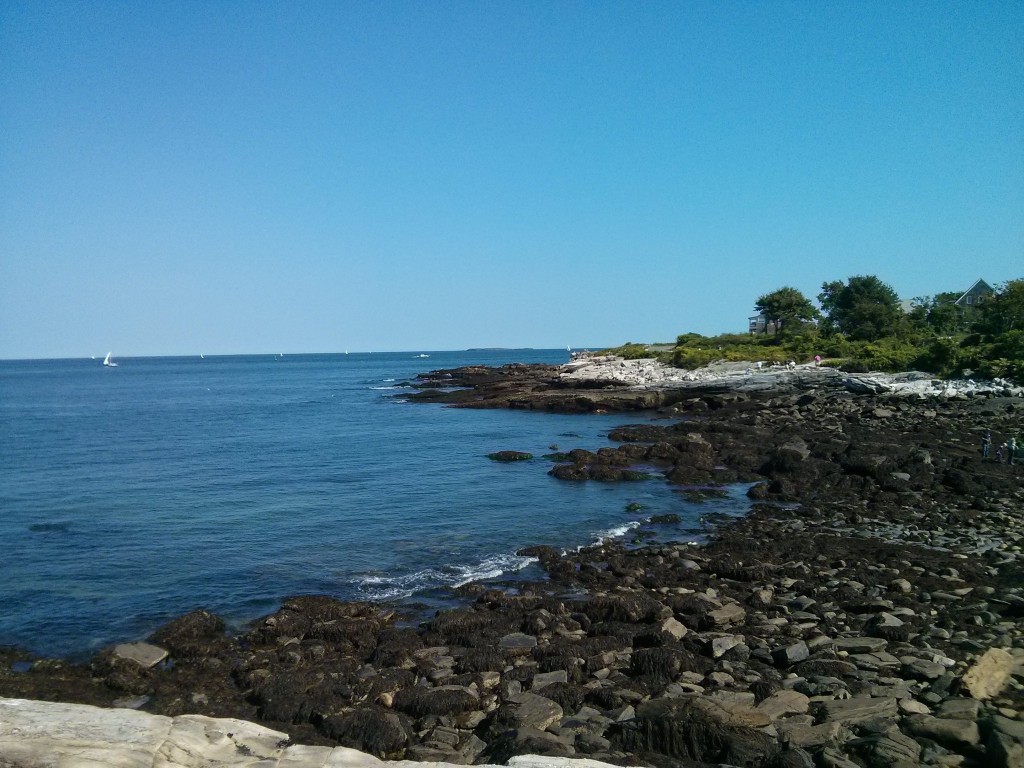 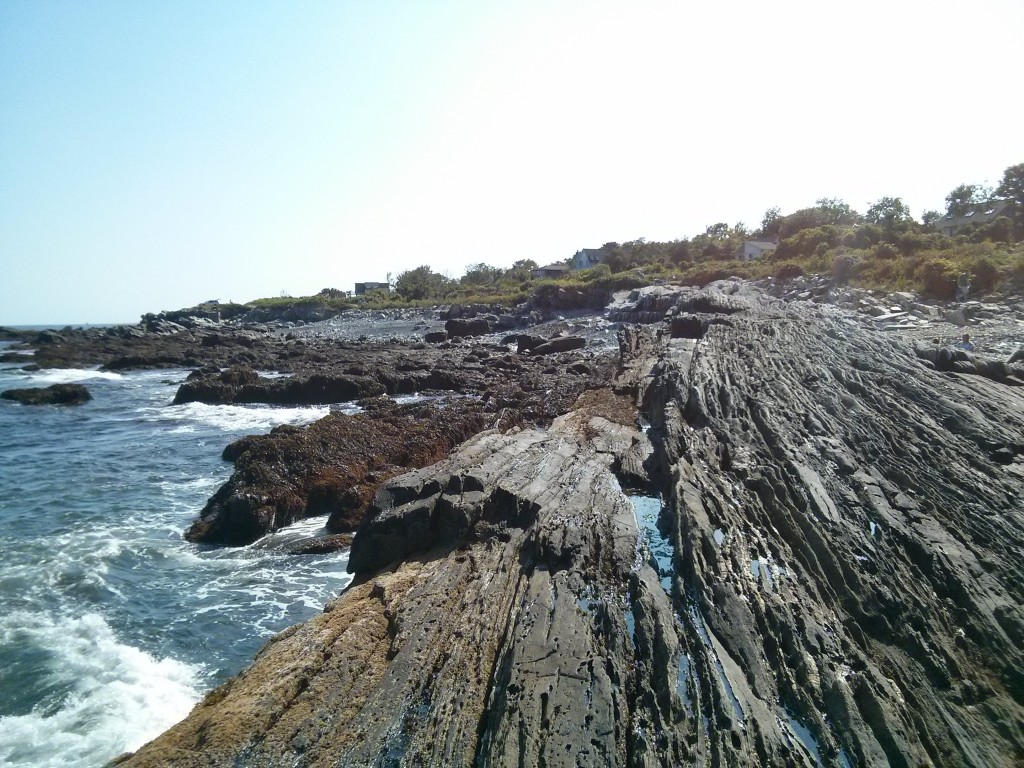 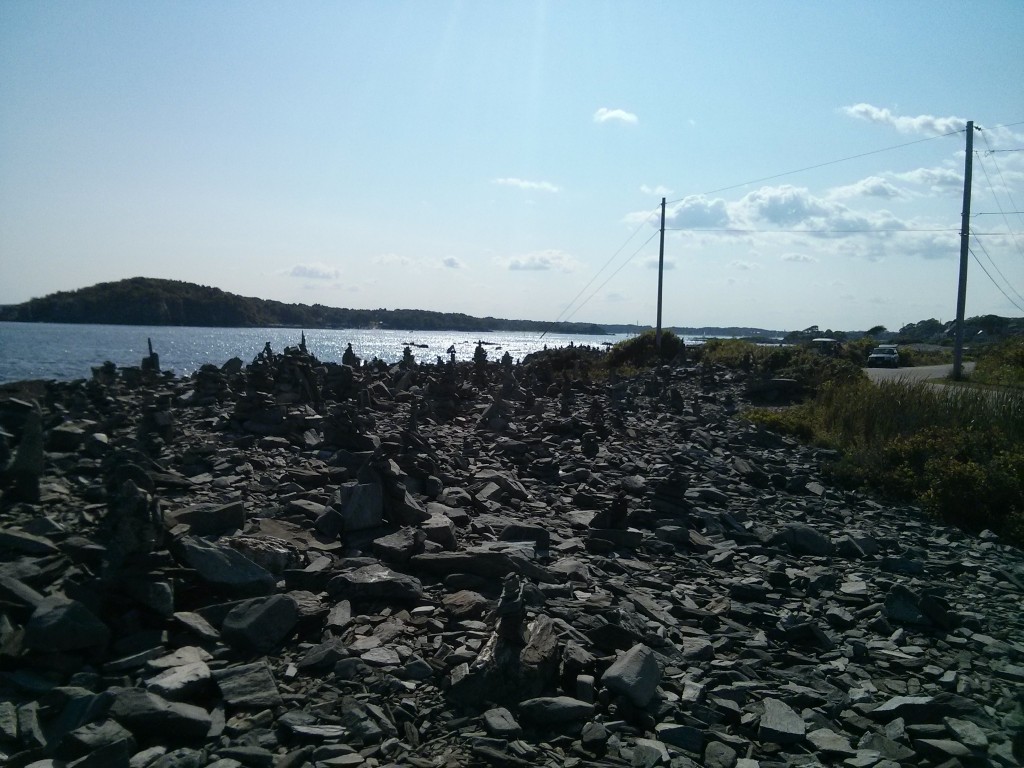 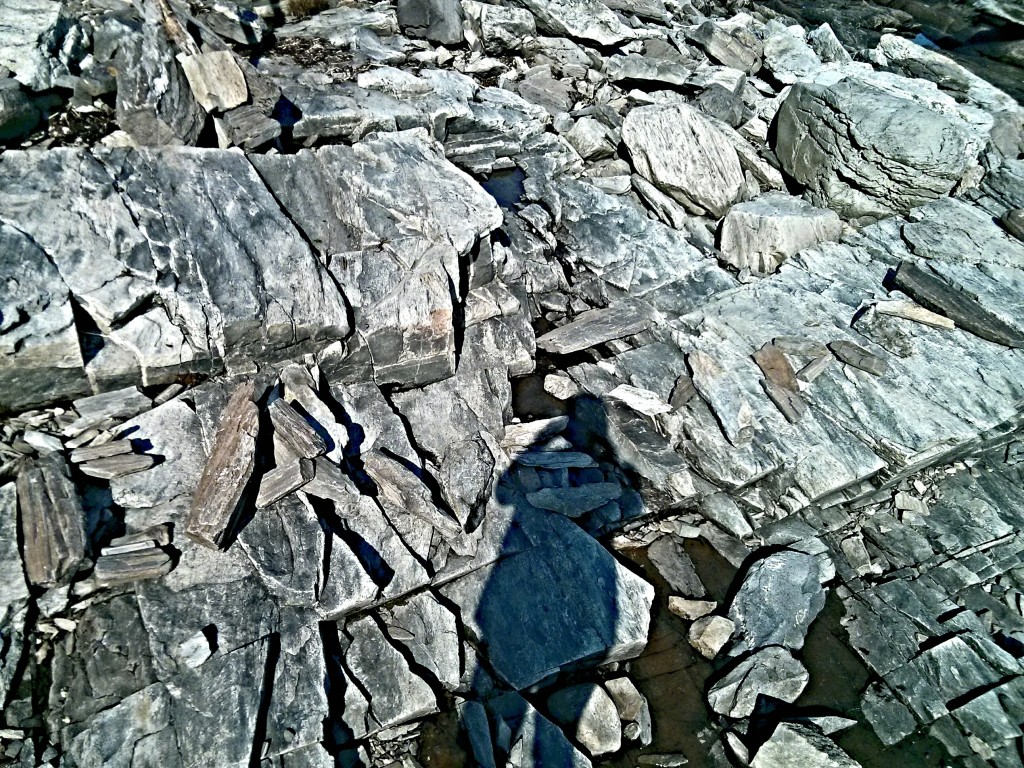 Knowing we were in a for a long, long drive home, we turned in our bikes and left Peaks Island without getting to try any of the restaurants of shops. However, we weren’t going to leave Maine without one more lobster roll. A short way south of Portland, we found Fisherman’s Catch Restaurant in Wells, Maine which served what might have been the best lobster roll of the weekend – because it had BACON! Yes, that’s right, bacon on a lobster roll! I devoured it as soon as it was placed in my hand so if you want to see what the roll looks like, you’re just going to have to make your way to Fisherman’s Catch and get one for yourself. 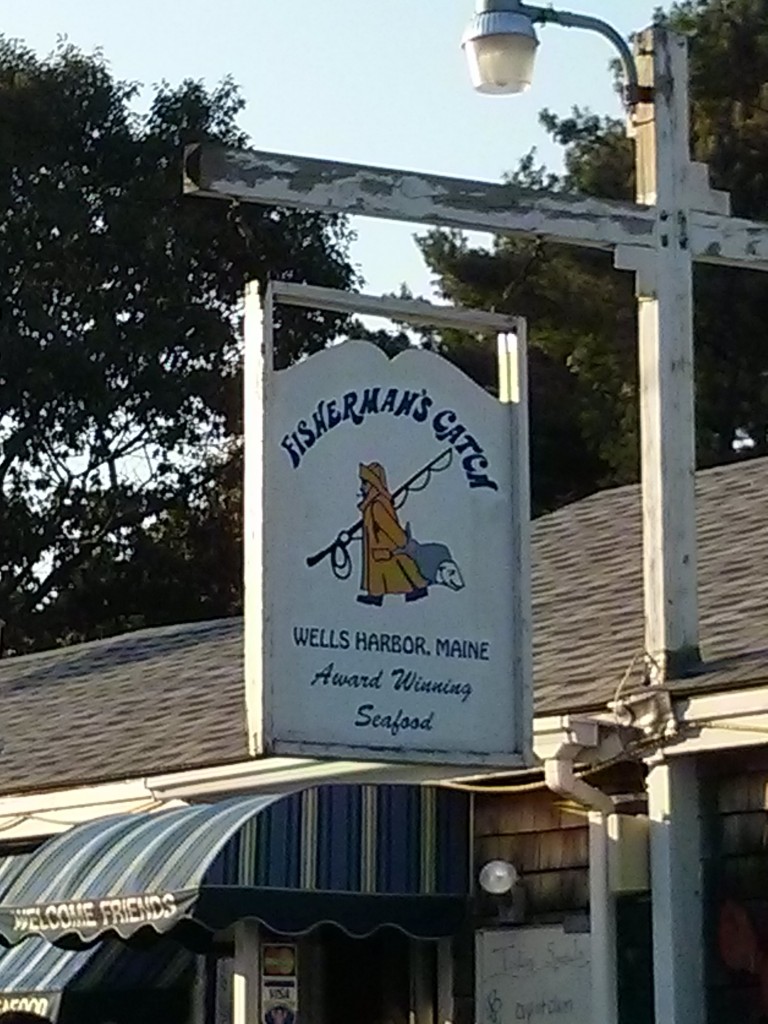 This being my second summer tip to Maine, it’s truly become one of my favorite states. The food, the scenery and the lifestyle are unlike anything I’ve experienced in other parts of New England; and after what I’ve seen and done in Maine, I understand why it’s nickname, “Vacationland,” is the most appropriate description of this truly majestic place. So, Maine, we’ll definitely be back next summer, and probably every summer after that! 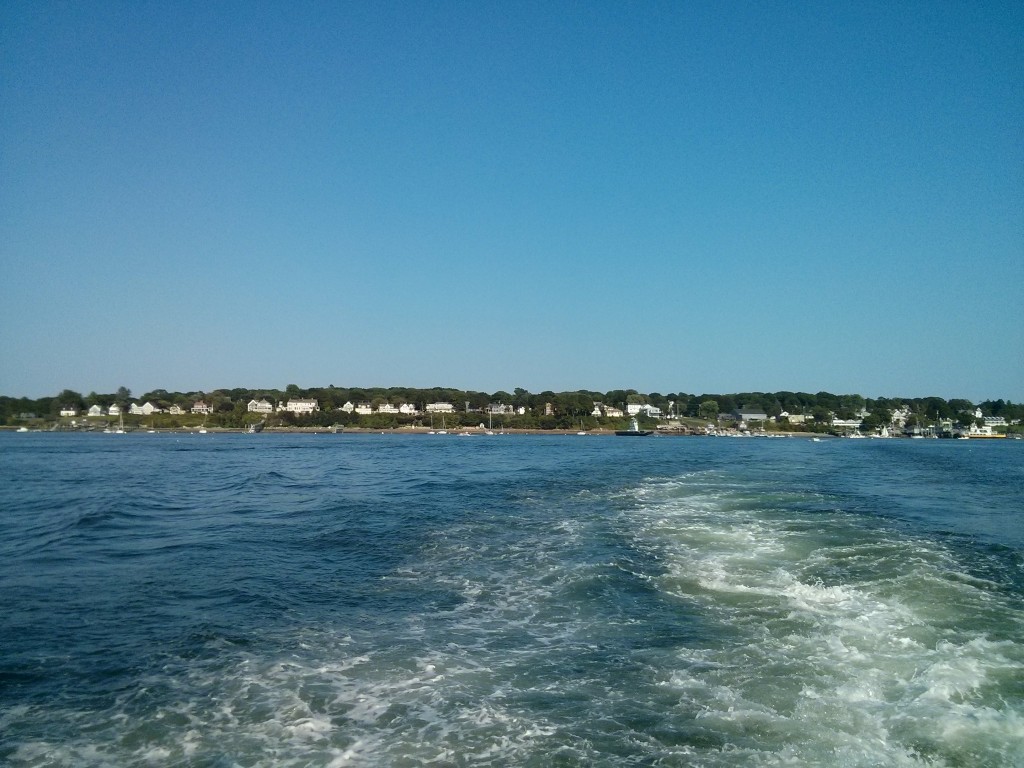