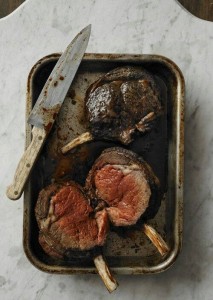 “If there is a God, no part of the Bible or Christian doctrine will convince me of his existence half as much as the flavor of a barbecue pork rib.” – Nick Offerman

If you’re anything like me, you know that food embodies all that is good and right in the world. No matter what you’re doing or what mood in you’re in, good food puts you in an unparalleled state of euphoria from which you can watch all of the world’s problems dwindle away. When we’re eating, we’re at peace. Every bite into a cheesy, crunchy slice of pizza is an escape from the brutality of daily living; each chomp into a medium-rare ribeye steak is like a perfectly executed high-five with God; that last french fry in the basket is the final step toward absolute and seemingly eternal jubilation. But then, you’re done eating and shame and remorse start to creep in while you begin thinking about how many sit-ups you’ll have to do to burn off the extra blue cheese.

A major issue with men’s culture is the pressure we’ve placed on ourselves to sculpt our figures to the proportions of athletes and models. We fool ourselves into believing that the most important thing in life is getting our bodies to resemble those of our idols, and in this pursuit we sacrifice that which brings us the purest of life’s joys: eating. 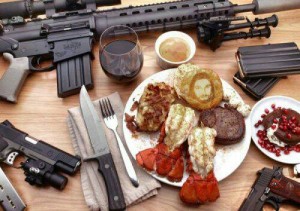 Now this isn’t to say that health isn’t important – it absolutely is. We need to keep ourselves in shape so that we can adequately perform the duties assigned to us by our gender. If you’re weak and out of shape, you’ll struggle to hunt, build shelter, fight off predators, and defend your land and property from enemies. However, if you aren’t regularly consuming plentiful amounts of pork, beef, and beer, you run the tremendous risk of one day realizing that you probably aren’t as happy as you might of been if you had gone for pizza instead of kale.

As important as it is to be healthy and fit, it’s also important to be alive and let yourself give in to your desires and cravings. Eating healthy is all about eating well; I’m not saying you should pull up to the McDonald’s drive through whenever you’re craving a burger – but if you’re craving a burger, then go and get a damn burger, and make sure it’s a fucking awesome burger made of premium beef, topped with quality cheese and a generous helping of bacon!

The healthiest meals are the ones that fuel your soul as much as they do your body. Once we learn to stop feeling stressed and guilty about our indulgences, we’ll be healthier and happier than we’ve ever been before.

On a final note, I leave you with the wisdom of the great Nick Offerman, who has inspired many of the philosophies inscribed in this blog:

I eat a bunch of spinach, but only to clean out my pipes to make room for more ribs, fool! I will submit to fruit and zucchini, yes, with gusto, so that my steak-eating machine will continue to masticate delicious charred flesh at an optimal running speed. By consuming kale, I am buying myself bonus years of life, during which I can eat a shit-ton more delicious meat. You don’t put oil in your truck because it tastes good. You do it so your truck can continue burning sweet gasoline and hauling a manly payload.

And with that said, let’s eat! 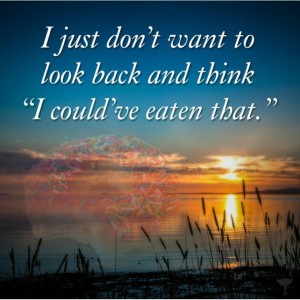 * All images courtesy of TheChive