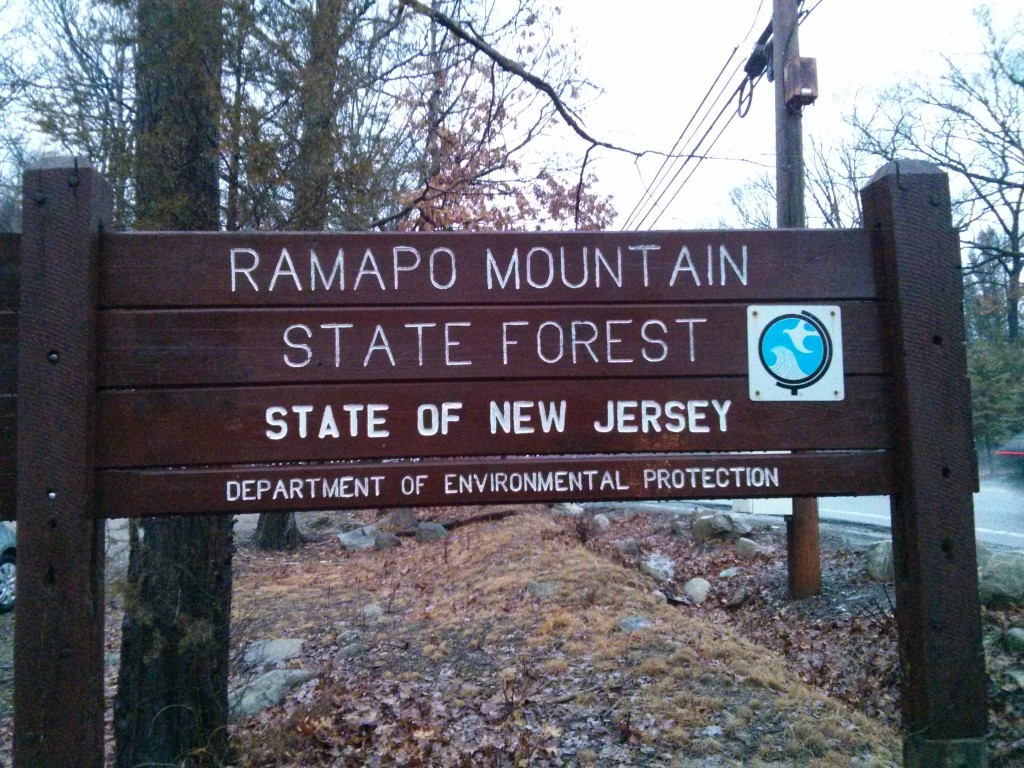 Barely a week old and 2014 already brought with it devastatingly frigid temperatures and winter storm Hercules which dumped about 8” of snow on the NJ/NYC area. While single-digit temperatures and frosted roads are obvious reasons to stay indoors, CavemanUnbound decided to seize the day and do some exploring! Exited about possibly being the only people crazy enough to take on the trails, we put on a few warm layers, loaded up the 4Runner(aka the beast!) and headed north to the Ramapo Mountain State Forest in Oakland, NJ. 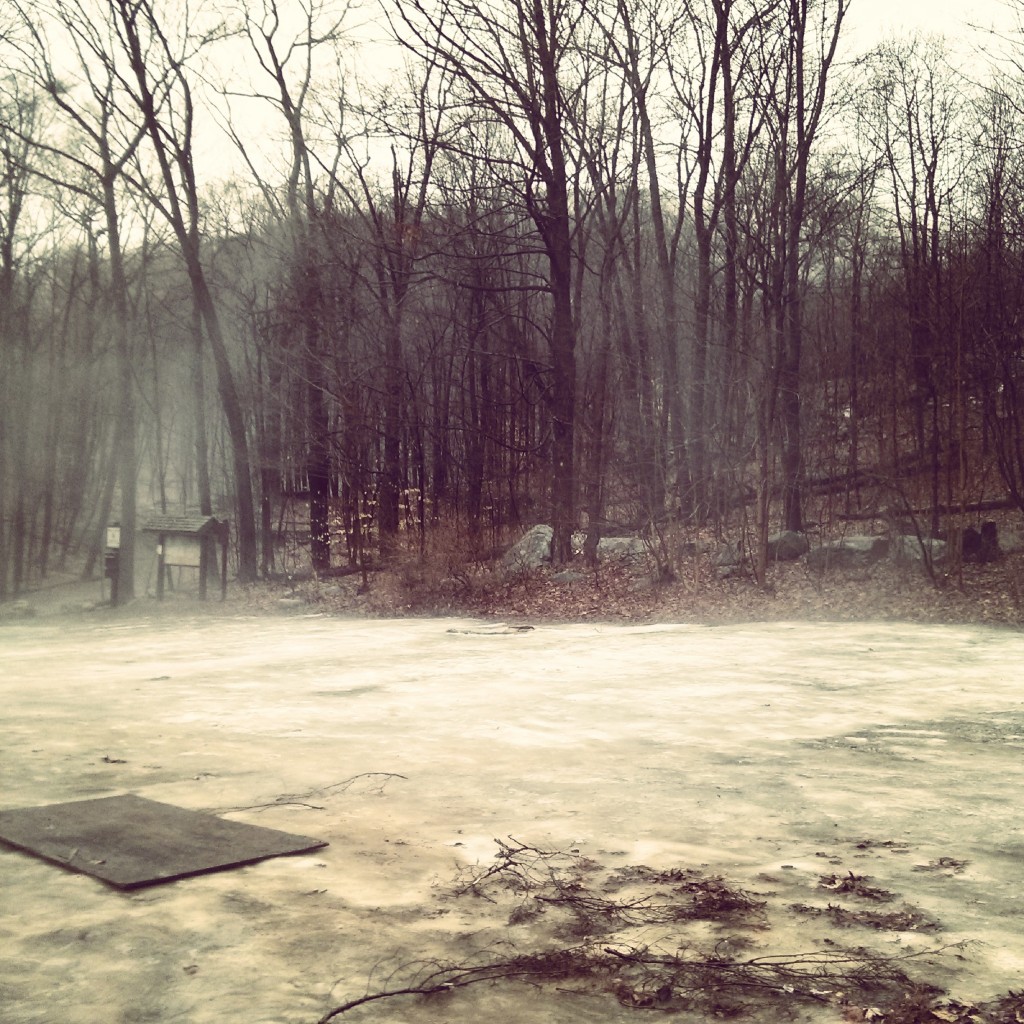 Boasting wildly popular attractions such as Ramapo Lake and the ruins of the Van Slyke Castle, this area is usually swarming with hikers who begin arriving as early as 7 AM. Luckily for us, the weather was so terrible that we weren’t expecting to have much company on the trails.

After an hour-long drive (from the George Washington Bridge) through spasms of torrential rain and pangs of deep hunger, we arrived at the lower parking lot (accessible from I-287, Exit 57 to Skyline Drive) and faced what was perhaps the toughest challenge of the entire day: parking the car in the completely frozen lot. A thick sheet of ice had blanketed all but a few parking spaces (which were surprisingly occupied) and it made maneuvering the car into a secure spot quite difficult. As always, though, our persistence prevailed and we managed to safely get the car over dry ground without suffering any casualties. Excitedly, we geared up, made our way slowly over the ice and onto the trails and began our search for the Van Slyke Castle. 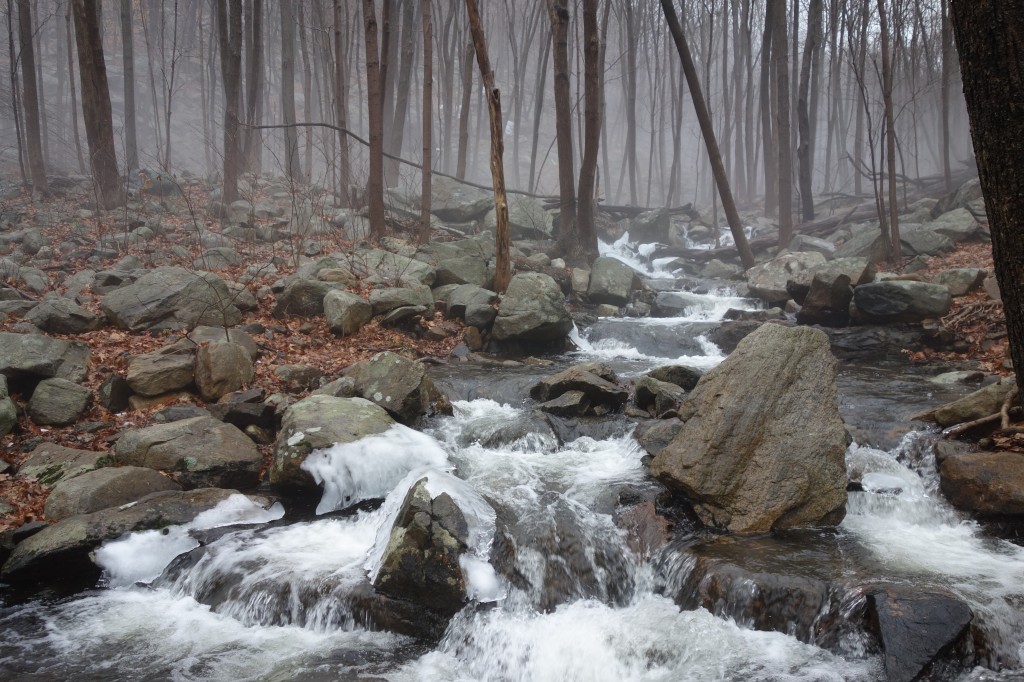 From the lower parking lot, we started on the MacEvoy trail (blue blazes) which provided an easy, direct walk to Ramapo Lake. Most of the trail runs parallel to a very charming stream that merits at few minutes of admiration, especially if visiting after heavy rainfall. With its gentle incline, easy-to-manage rock scrambles and calm atmosphere, the MacEvoy trail is a great hike for beginners and anyone looking for an effortless walk through the woods. Even with all the mud and ice covering the trails on the morning of our hike, it was a relatively painless journey. 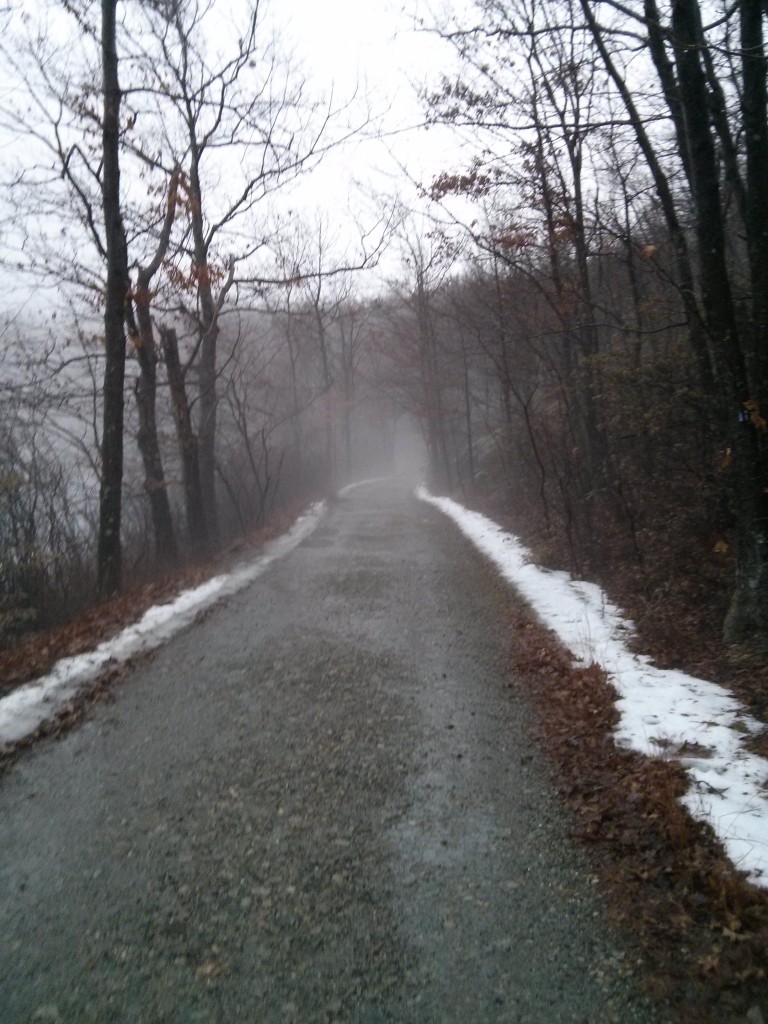 After about a half-mile on the trail, we arrived at our first point-of-interest: the revered Ramapo Lake. In the warmer seasons, this magnificent 120-acre man-made lake is the perfect location to unwind and absorb the deep blue of the water along with the green and brown forestry in the distance. Today, however, we encountered a completely different scene and got to experience first-hand the extreme changes brought about by the harsh winter season. The lake, usually a sprawling expanse of peaceful water, was transformed into a completely frozen dead zone. The week’s sub-zero temperatures capped the surface of the lake with a solid blanket of ice and turned the outline of trees into dreary sticks of dead nature. Even as it began to rain, we found ourselves incapable of moving away from this majestic scene of the grand Ramapo Lake conquered by the unforgiving cold. 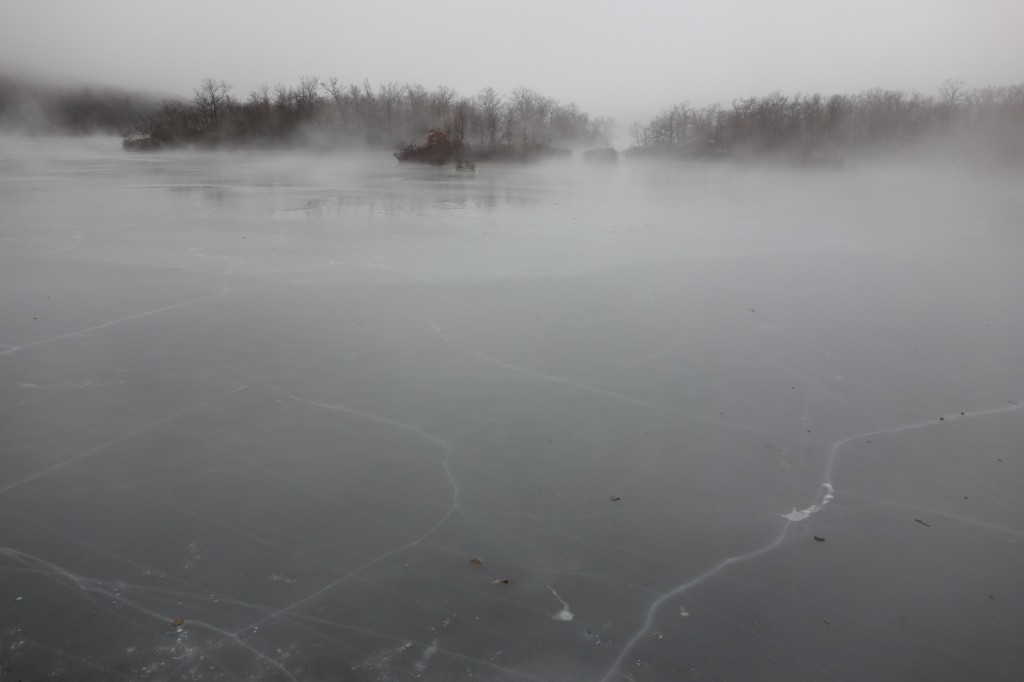 After getting some awesome footage of the frozen lake, we eventually decided to keep moving so as not to suffer the same fate. With no idea of how to find the castle (because we decided to ignore the maps), we continued along the MacEvoy trail (or, N Shore Dr) which circled the lake and gave us a few more incredible vantage points of the landscape. While checking out different locations along the shore, we found a spot with easy access to the water. So, naturally, we climbed down and spent some time standing on the surface of Ramapo Lake, all the while trembling at the thought of the ice shattering below our feet. With death defied yet again, we continued along in search of that damn castle. 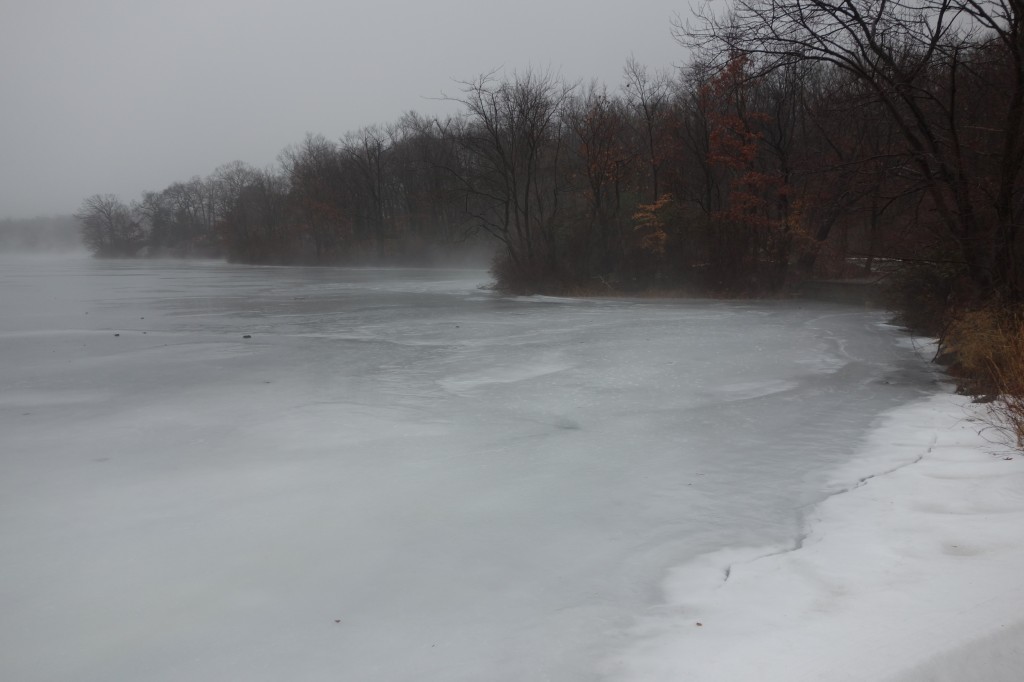 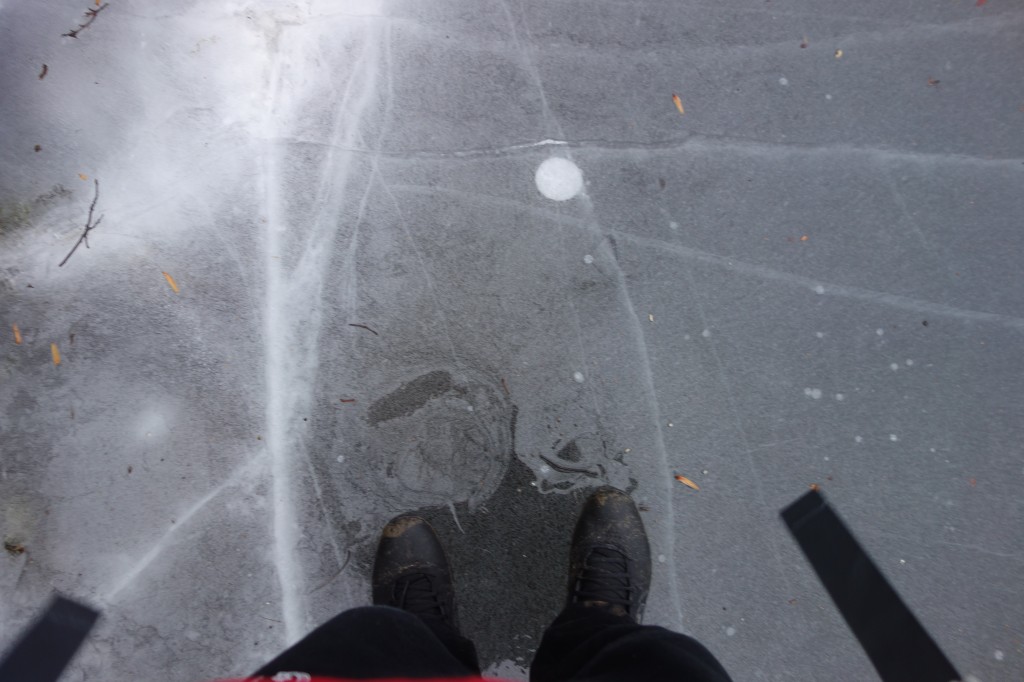 Strolling along the frosted path, we came across a trail diverging into the woods, marked by a red circle with a white C in the center. Logic immediately kicked in and told us that the C stood for “castle” and so we excitedly followed the trail, all the while thinking that we were finally on the right path. We trekked along this new trail for about a mile before our momentary enthusiasm was suddenly crushed by a stark realization: the white ‘C’ on the red circle did not stand for “castle” as we had assumed; it actually stood for the Cannonball trail and it had been taking us in the opposite direction of the castle.

The rain immediately picked up and washed away any remaining desire to continue searching for the Van Slyke Castle. At this point, we knew the manliest thing to do was simply to accept our defeat and make our way out of the park. With our spirits broken, we trudged back along the MacEvoy trail through all the rain and mud that seemed determined to make this the most miserable walk ever. Finally back in the car, we raced away from Ramapo Mountain State Forest, saddened by our failure to find the castle but fully determined to return in the summer and give it another shot. 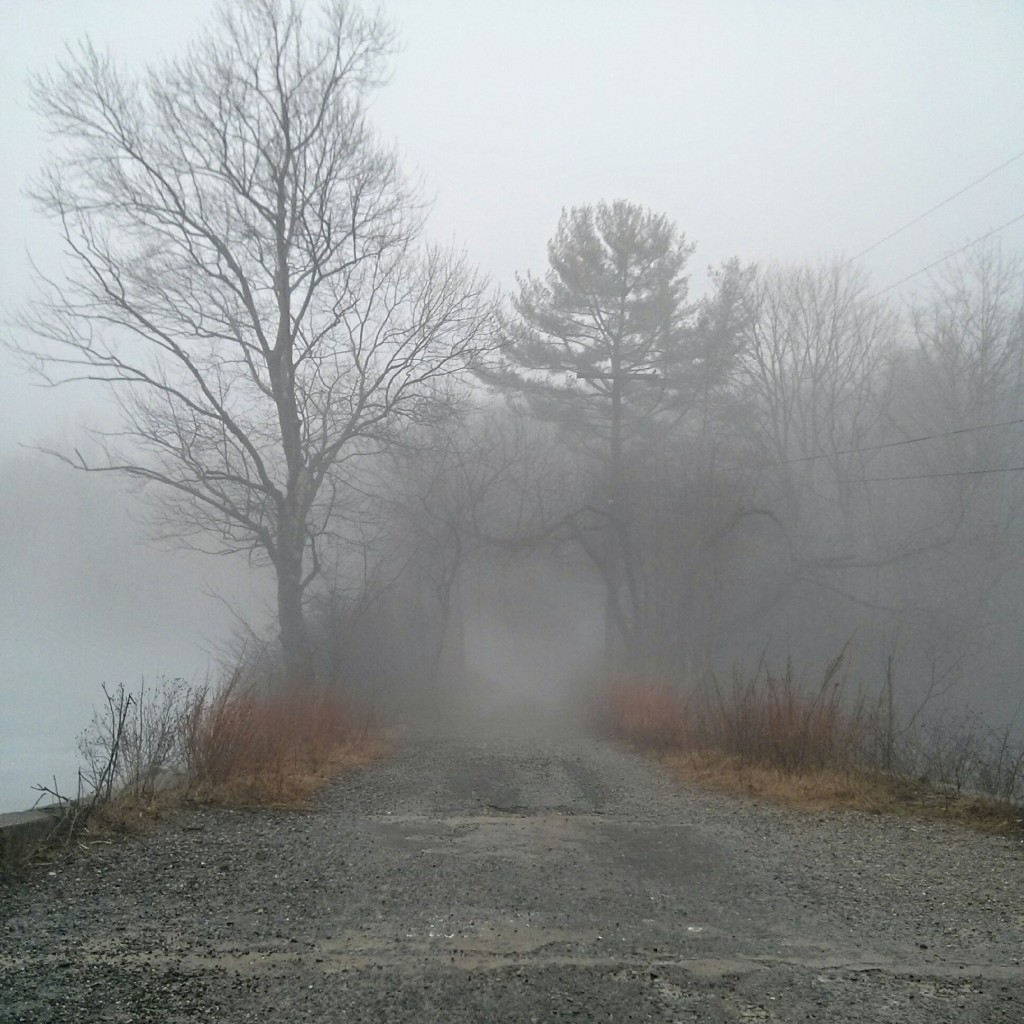