You merely adopted the cold; I was born in it, molded by it. I didn’t feel the sun until I was already a man and by then it was nothing but suffocating… actually, I was born in August, right in the middle of the sweaty, sticky, gross summer season and I think that’s why I’m always more welcoming to winter.

The 2014-2015 winter, however, was a much colder, meaner, more wicked beast than anything I’d ever experienced and I was getting tired of letting the snowstorms and single-digit weather keep me trapped inside the house. So to break the cabin fever we headed up to Woodstock, NY to fight our way to the top of Overlook Mountain. The trip up north to Woodstock started out with awesome potential but the closer we got to our destination, the more we realized that this wasn’t going to be an easy walk through the park. 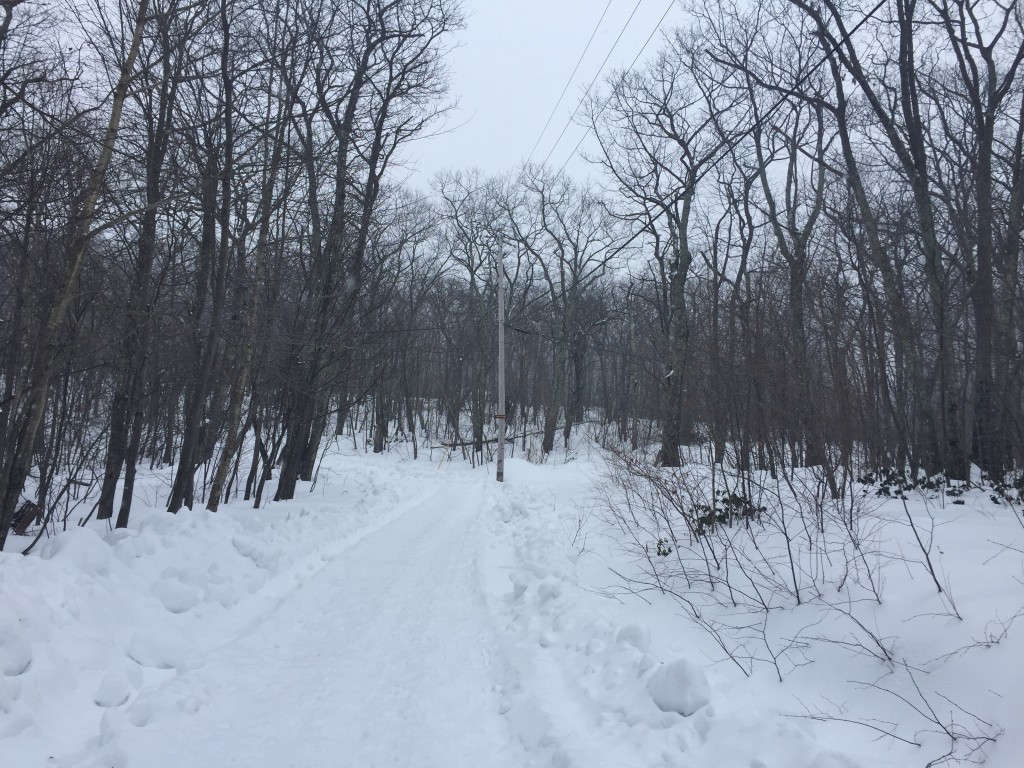 Within minutes of reaching the trailhead, the sky began to release yet another uninvited snowfall and we knew things were only going to get worse; especially when we say a group of hikers show up with snowshoes, ski pants and heavy duty winter gear. As minimalist hikers, we don’t believe in any of that – only boots and sweatpants for us! 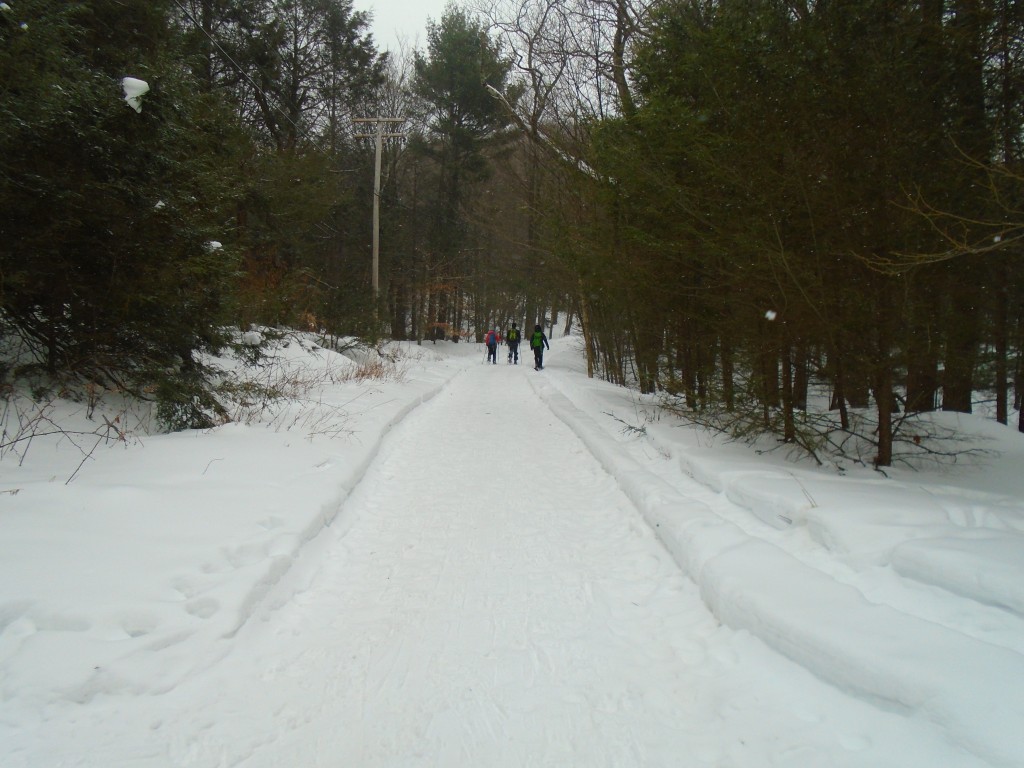 The trail we found was not at all what we expected; it is, on warmer days, just a dirt road that leads, almost vertically, to the top of the mountain. I can imagine this hike being very, very boring during the summer as you don’t really get a chance to be within the wilderness; instead, you’re just surrounded by it, longingly gazing into it as you trek by. And though the piling snow seemed the perfect metaphor for the heaping mound of misery that was this hike, it was also the only thing that made getting to the top of the mountain even slightly bearable. 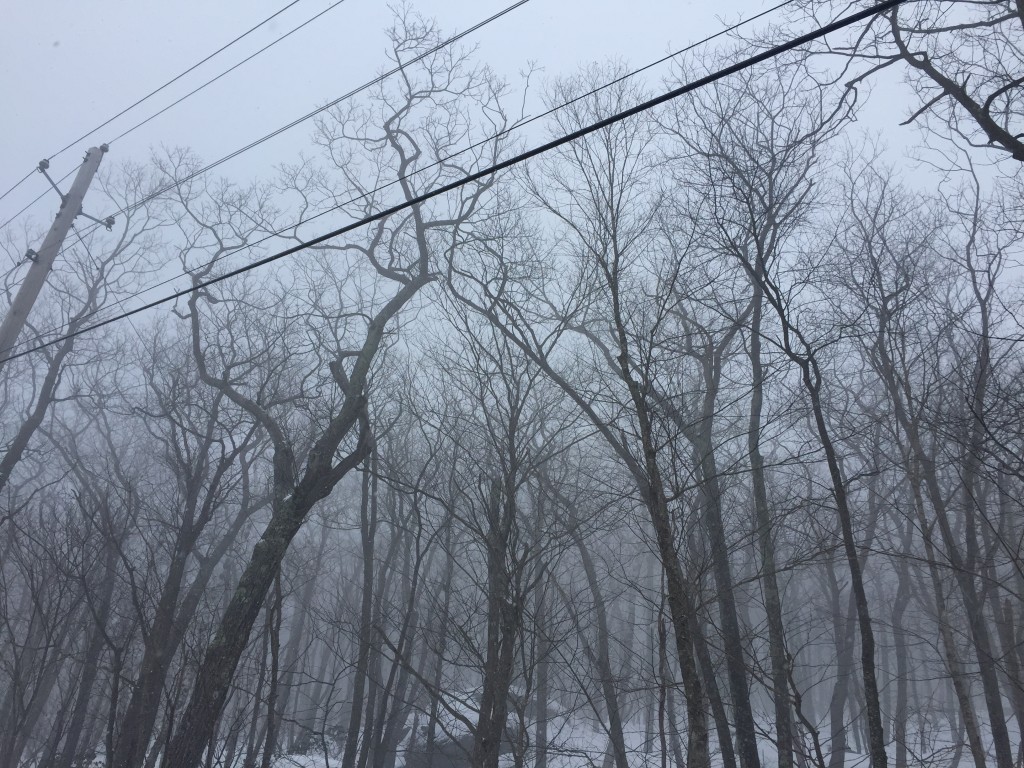 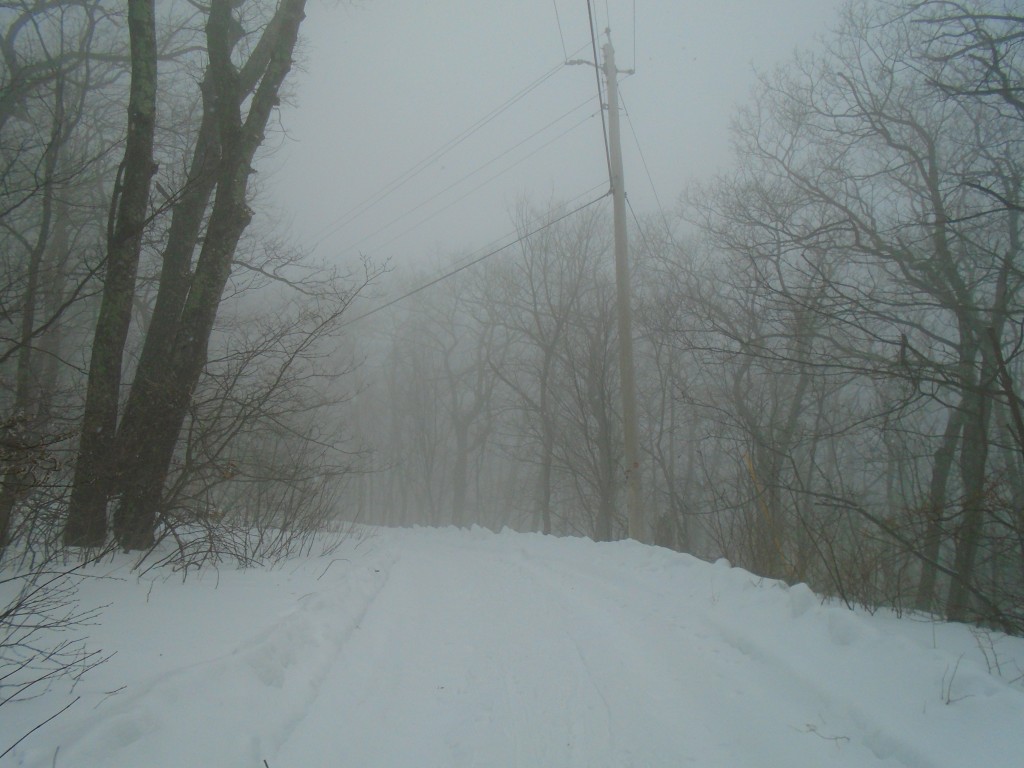 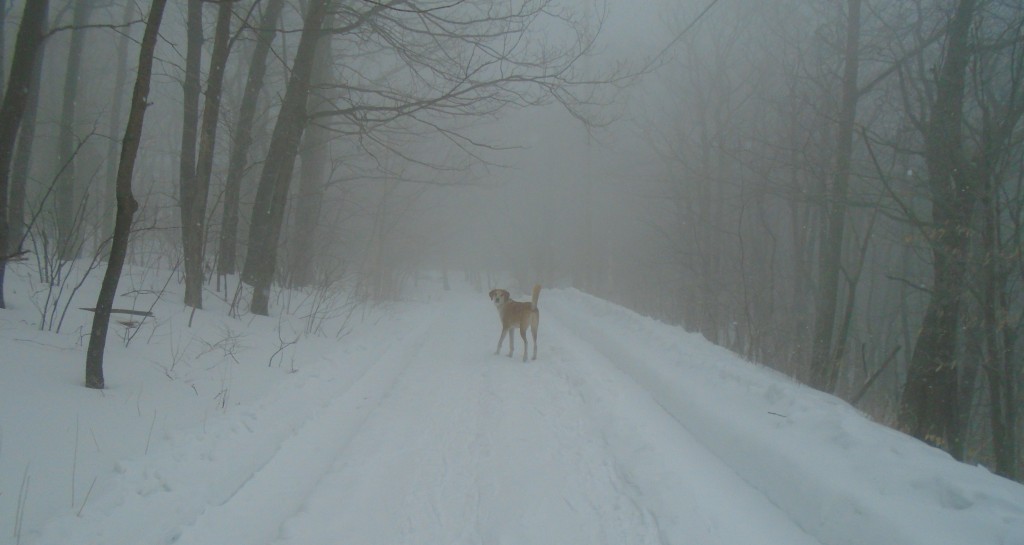 We continued trudging along the trail through the thickening blanket of snow, wondering if this hike would be worth the frostbite. Suddenly in the distance, the eerie silhouette of a dilapidated building began creeping out from behind the snow and the trees. The remains we found were of the abandoned Overlook Mountain House, one of the many hotels built around the Catskill Mountains while the region was being developed into a popular tourist destination, much like the remnants we found at Mount Beacon. 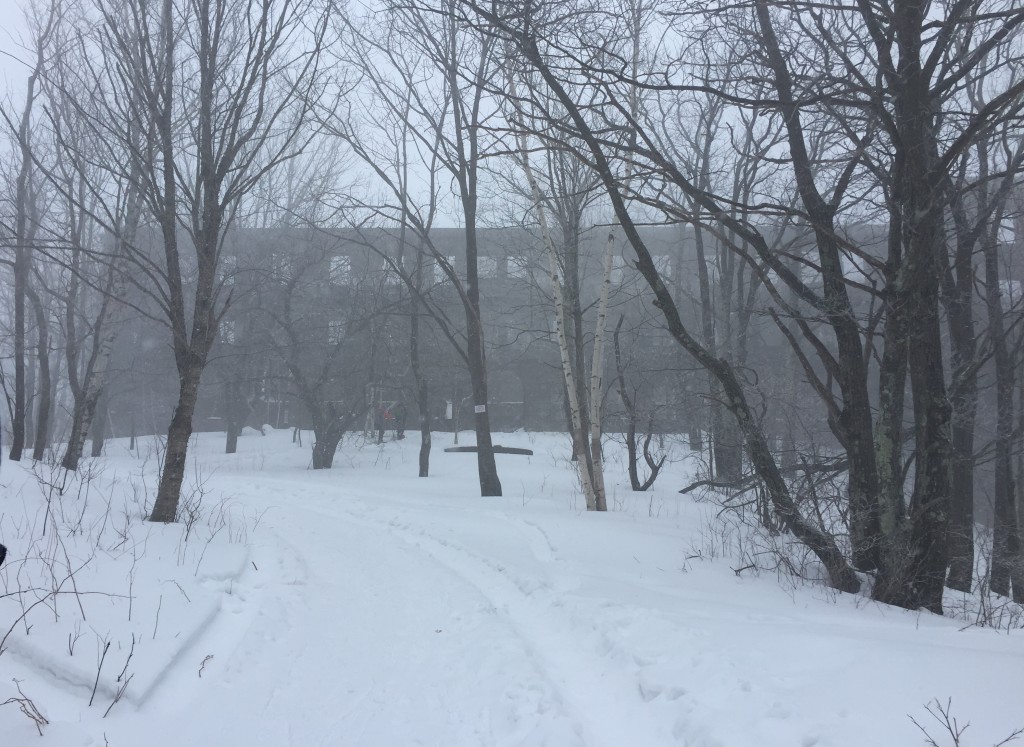 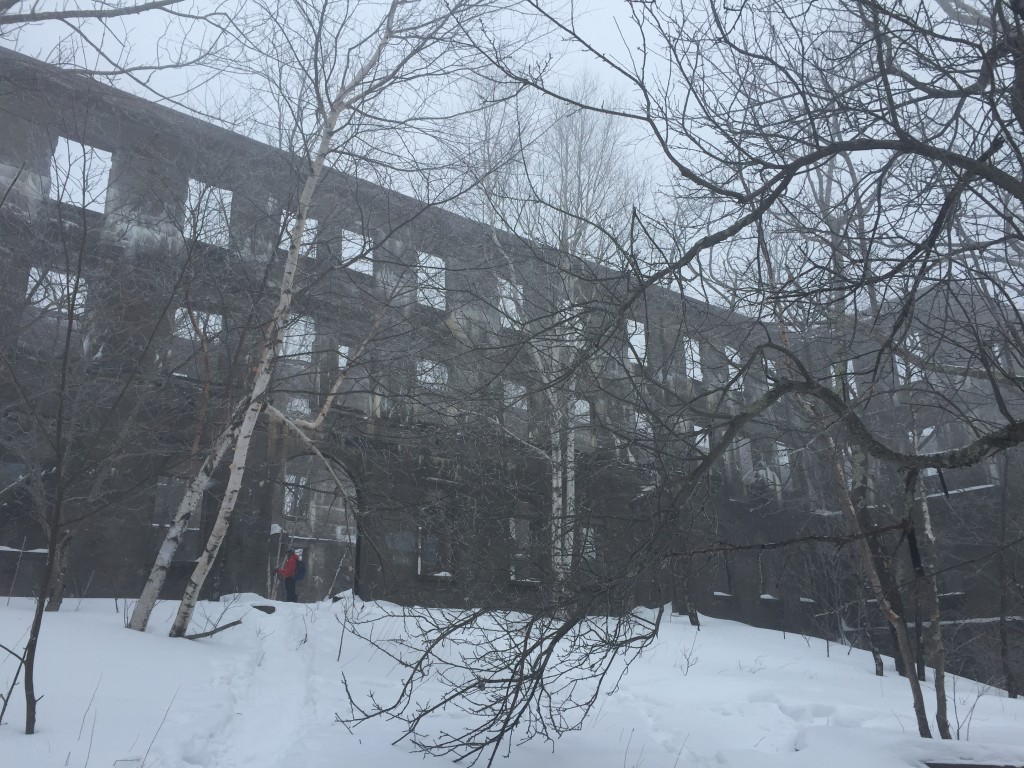 We stayed a while to play in the ruins and take in the glory of this sleeping structure. Nothing remains but the skeletal frame of the Overlook Mountain House but it’s still on hell of a vacationing spot – if you’re into old, creepy, abandoned buildings. 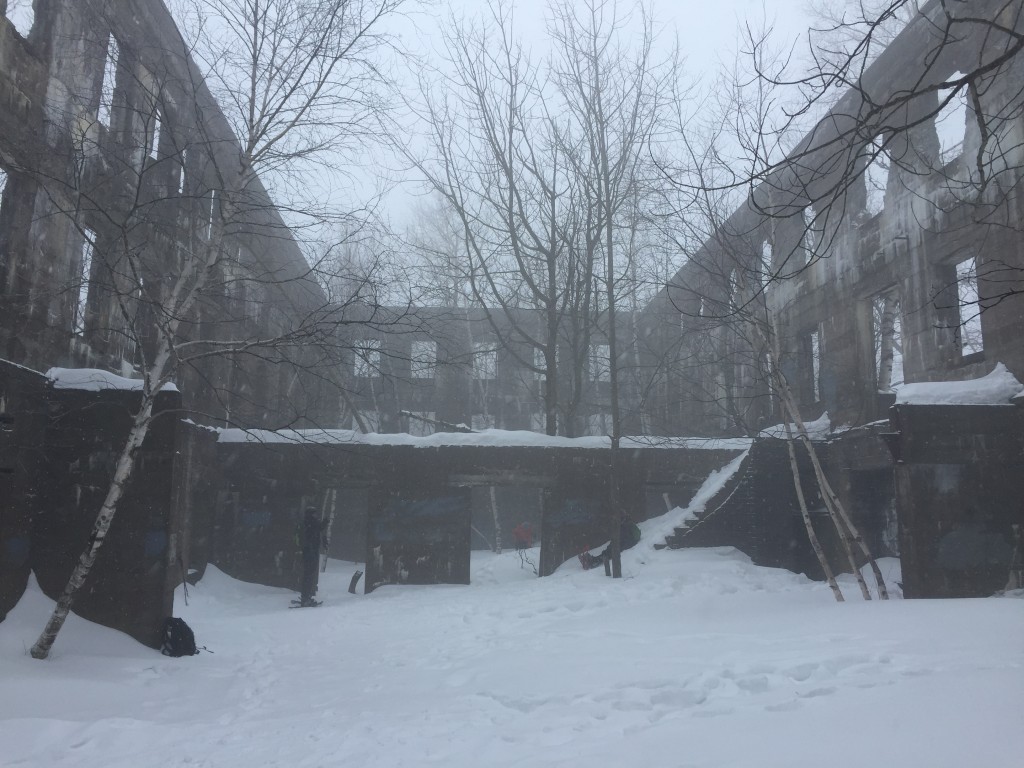 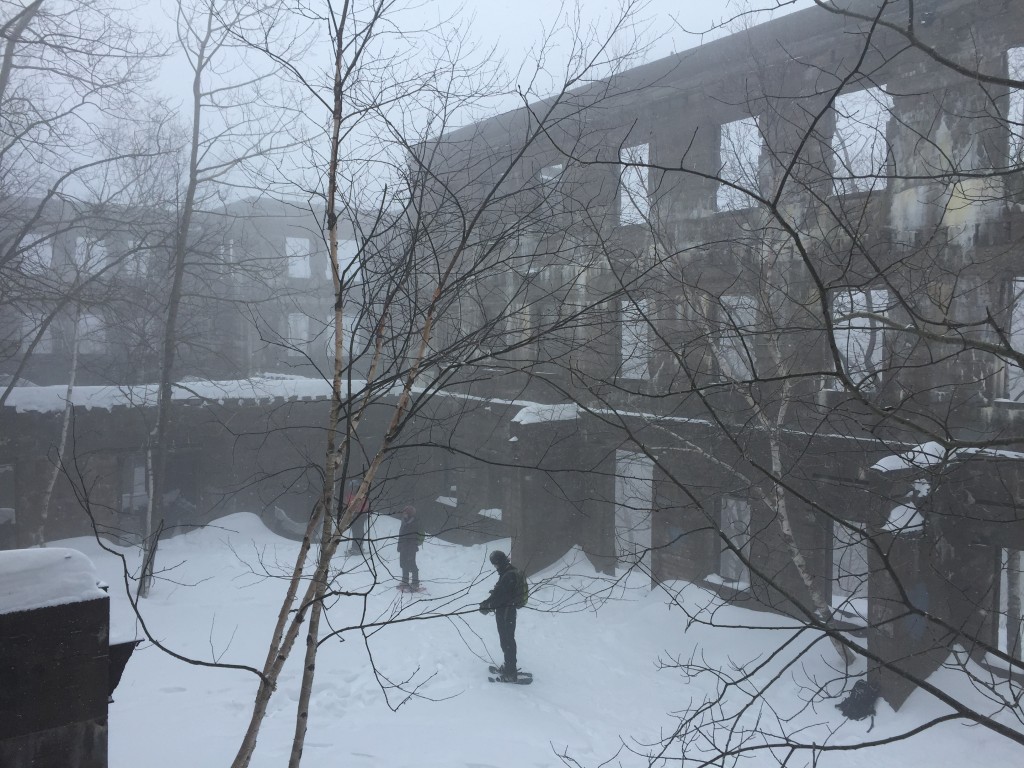 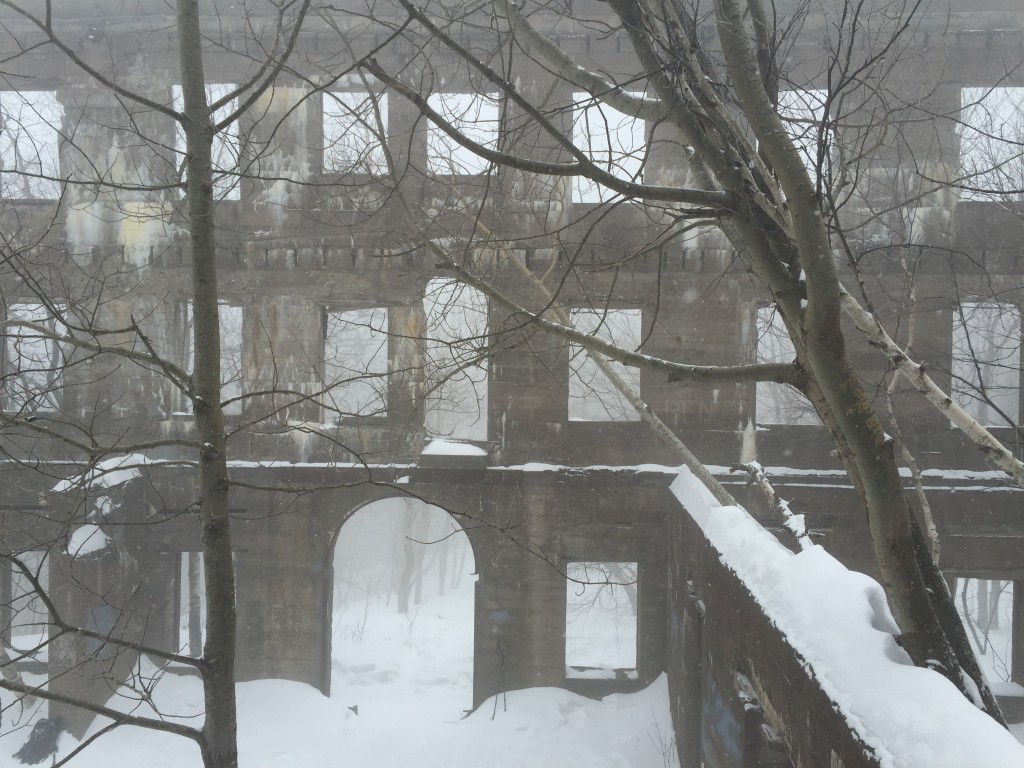 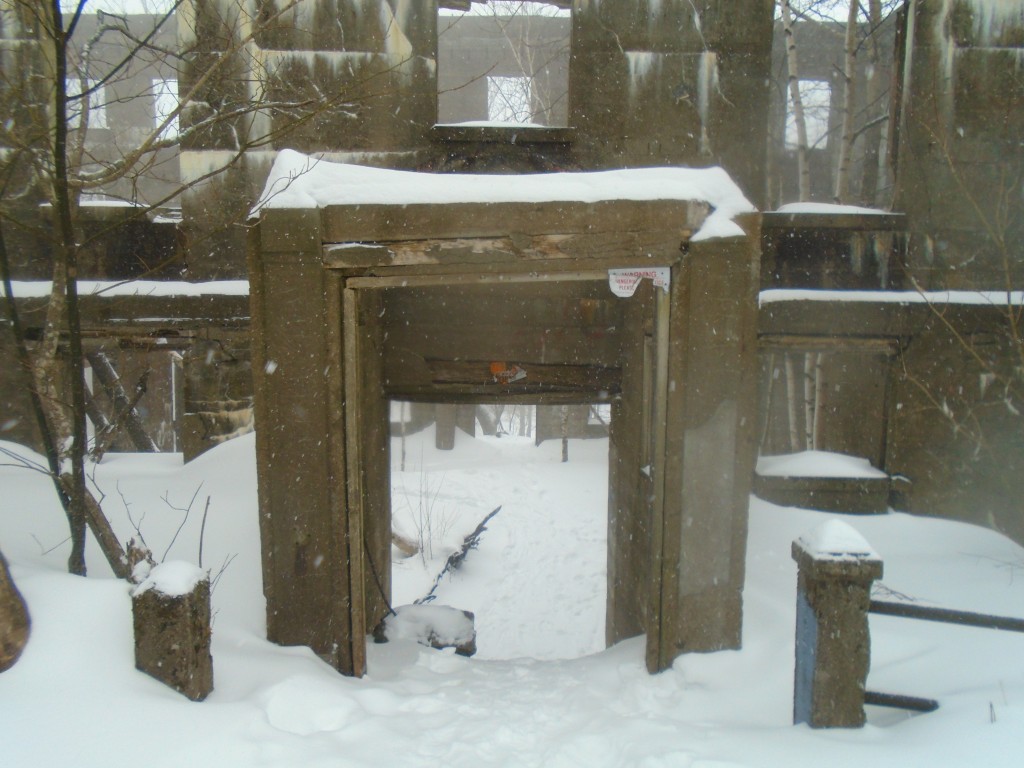 With chattering teeth and icicle fingers, we continued on in search of the Overlook firetower. The snow continued to descend upon us with no remorse and every step became more difficult and more miserable. 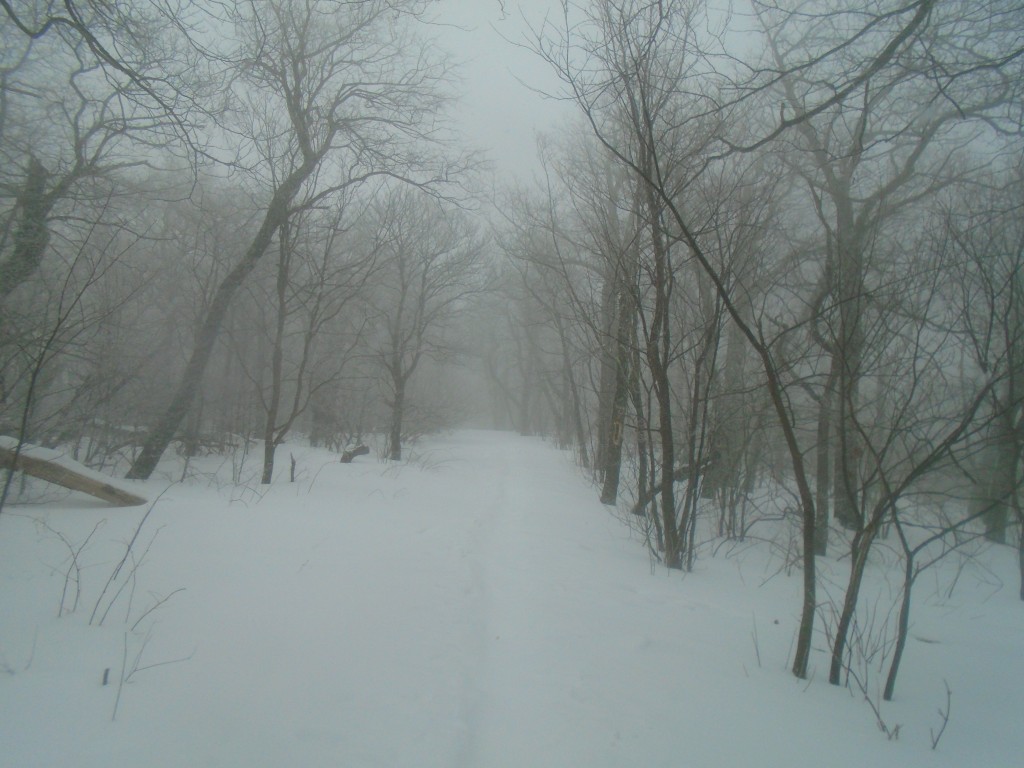 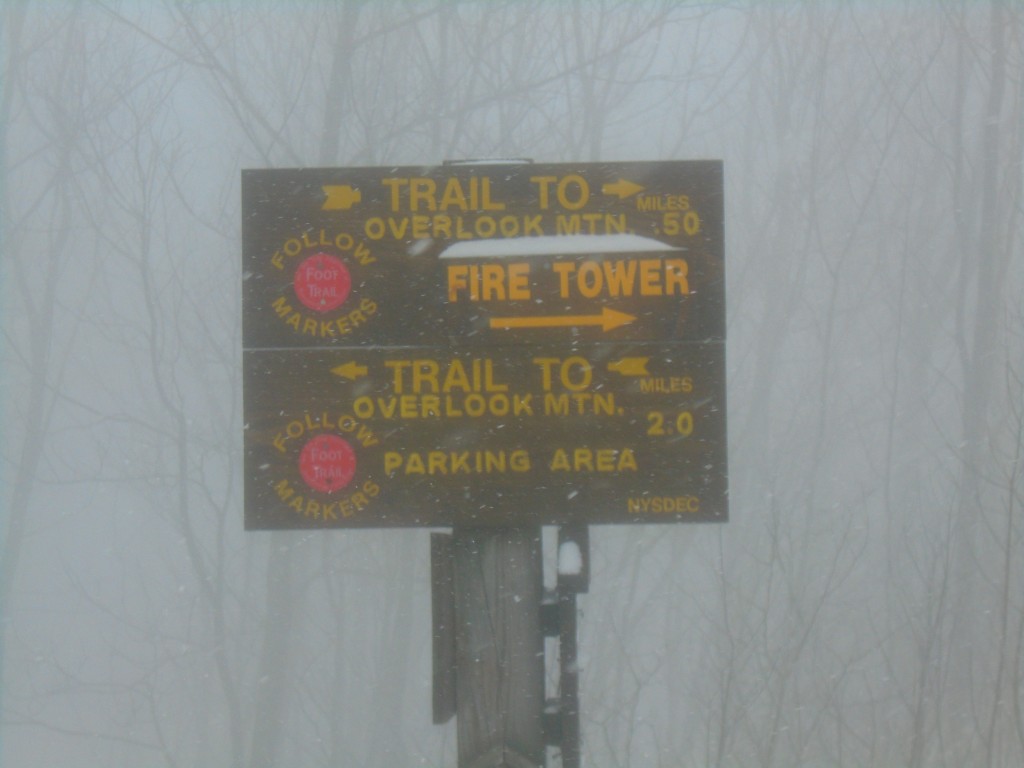 Finally, after an eternity of trudging through thick powder, we caught a glimpse of the frozen titan peering as us through the torrent of falling ice. 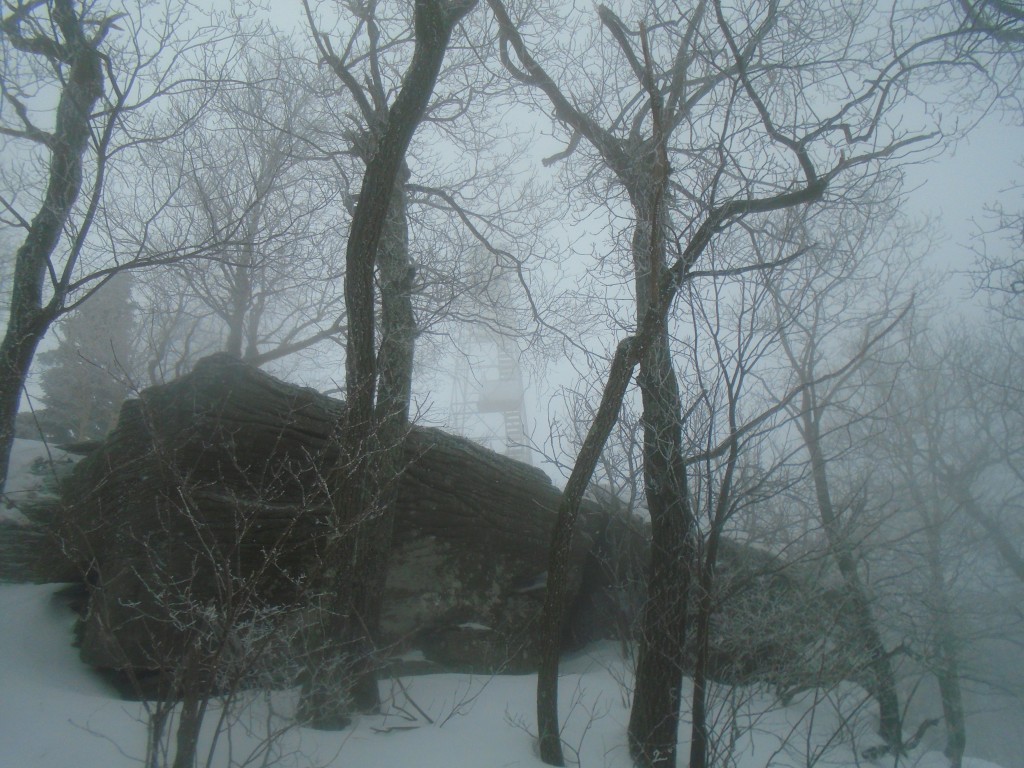 Though the snow seemed to strengthen the giant’s malevolence, we approached with angst and attempted to climb the firetower. 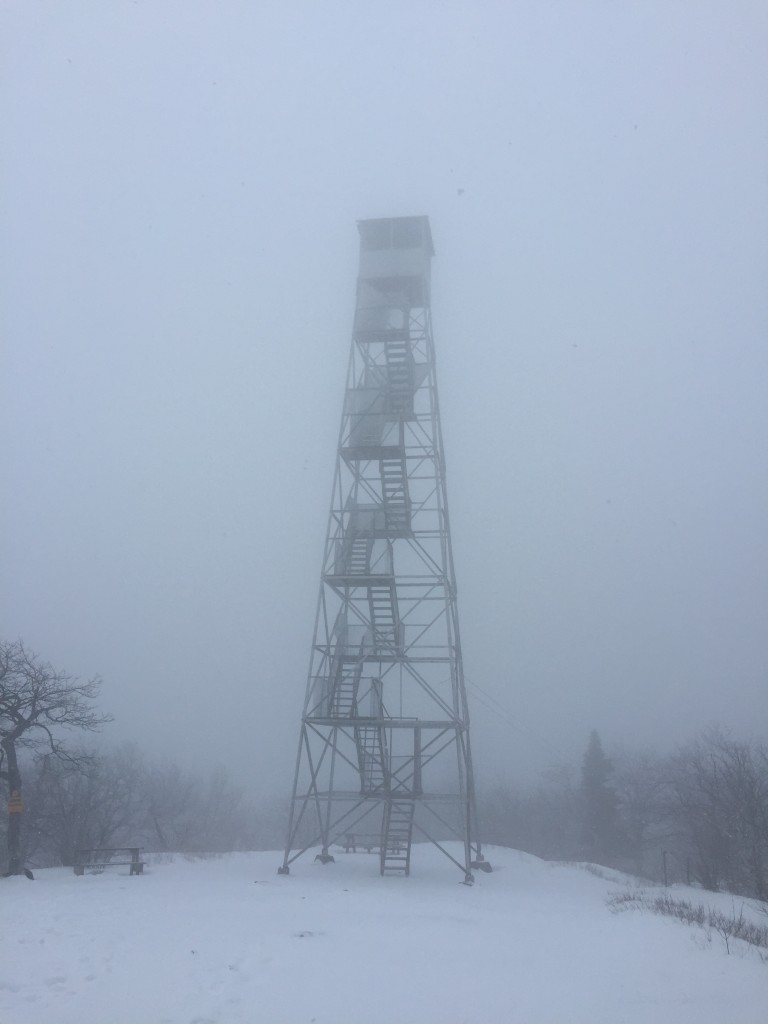 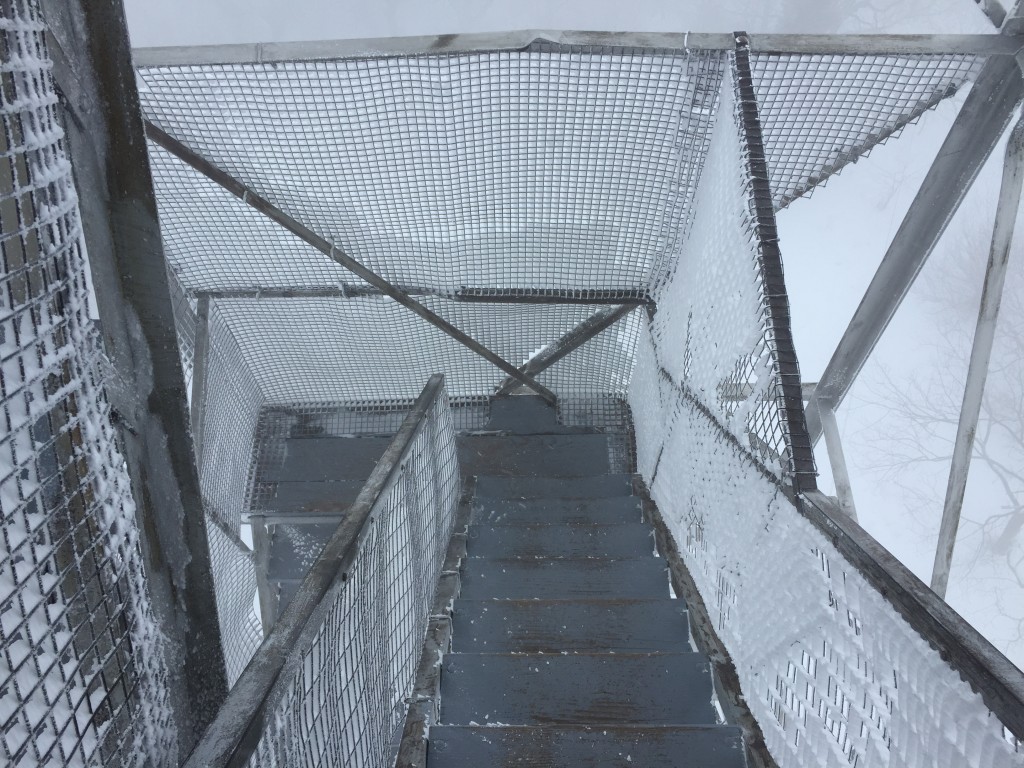 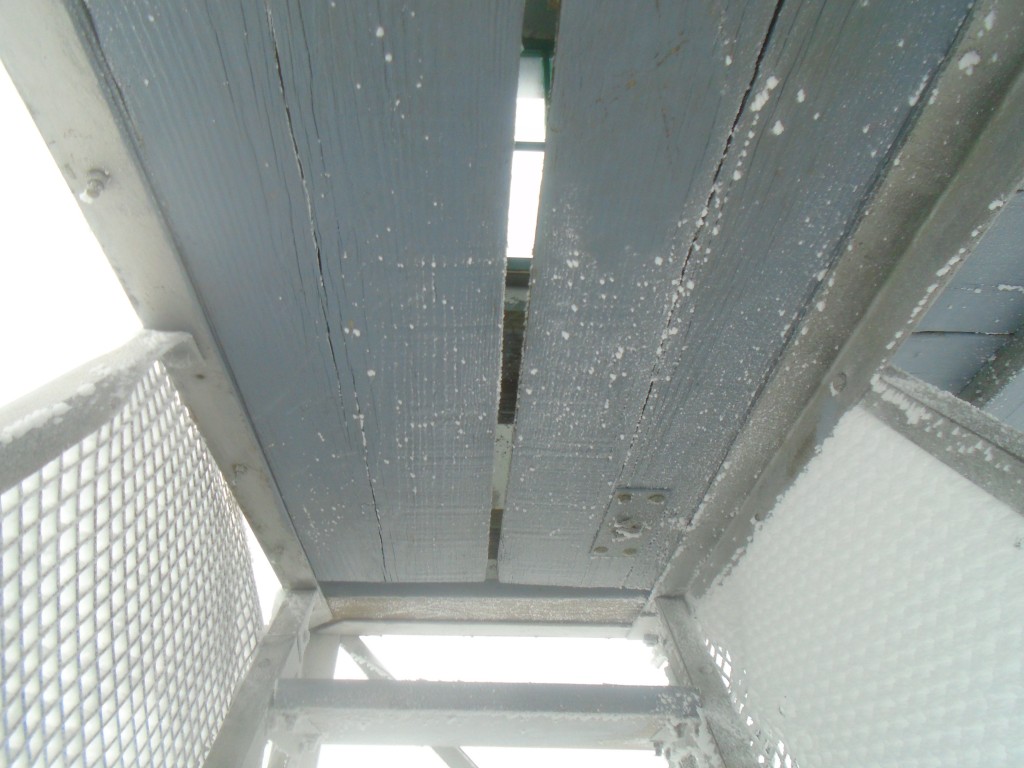 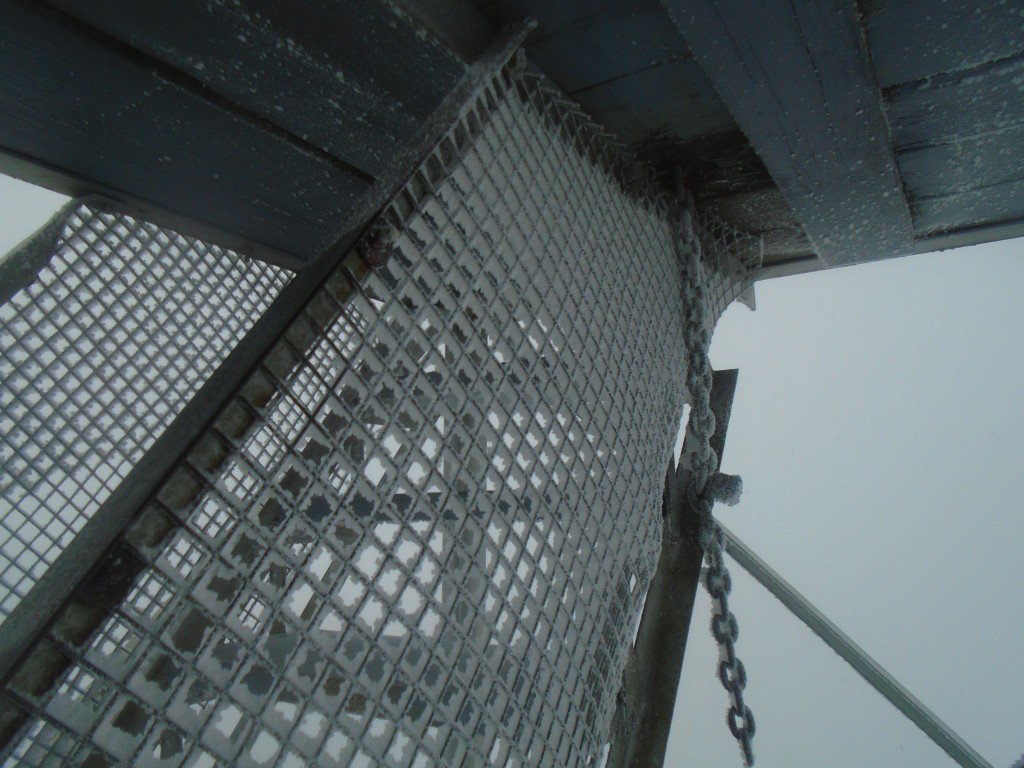 But unfortunately, after braving the frozen steps and ascending to the very top, the actual lookout post was locked shut and we couldn’t get through. Even though we’re all about kicking down doors, hopping fences, and trespassing everywhere, a giant lock and chains are pretty effective at keeping us out of where we aren’t supposed to be. Regardless, the view from the top steps was glorious as there only a completely white sky with zero visibility. 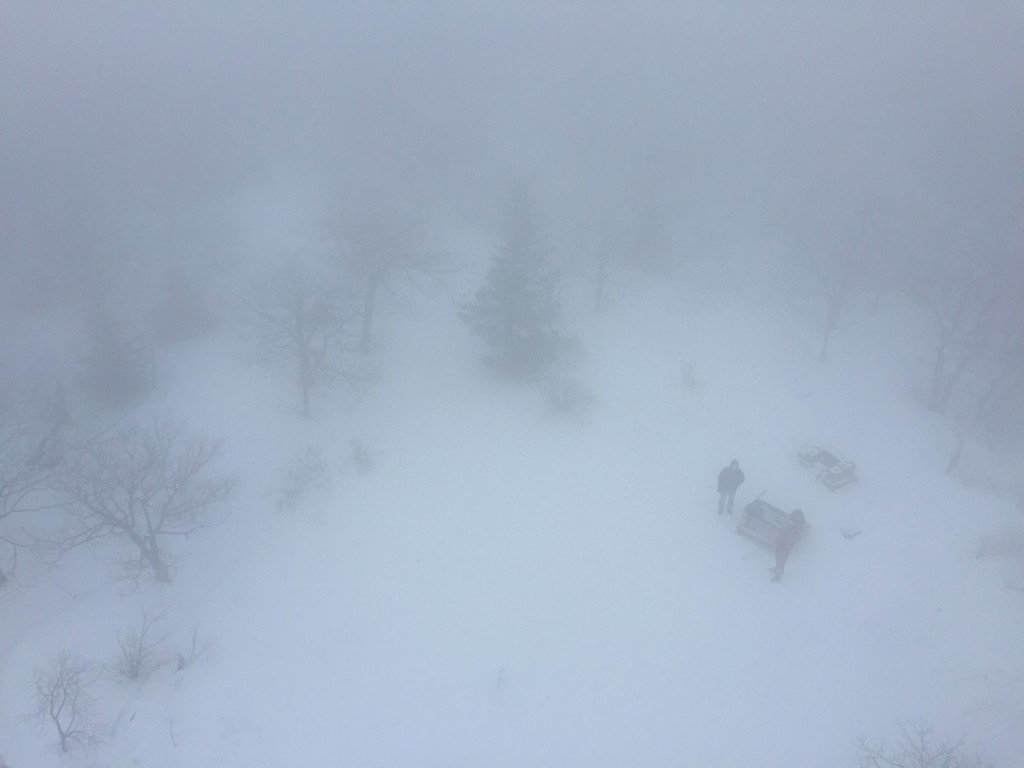 This adventure was a powerful reminder of the overwhelming force of winter. It consumes everything in its path without mercy and does not care for your runny nose, burning toes or numb fingers. It comes without invitation, stays without welcome and refuses to leave until we beg for its compassion and forgiveness. Luckily, the winter season has officially come to an end and though there are still a few piles of snow here and there – reminders of the darker times that were – we can finally start looking forward to warm weather and summer adventures!