Shouting “Manifest Destiny!” and continuing on our westward conquests, we headed to Ricketts Glen State Park in Benton, PA. We were still on some sort of high from the beauty of the Kaaterskill Falls, so we chose Ricketts Glen for its miles of trails along 20+ named waterfalls to check out. 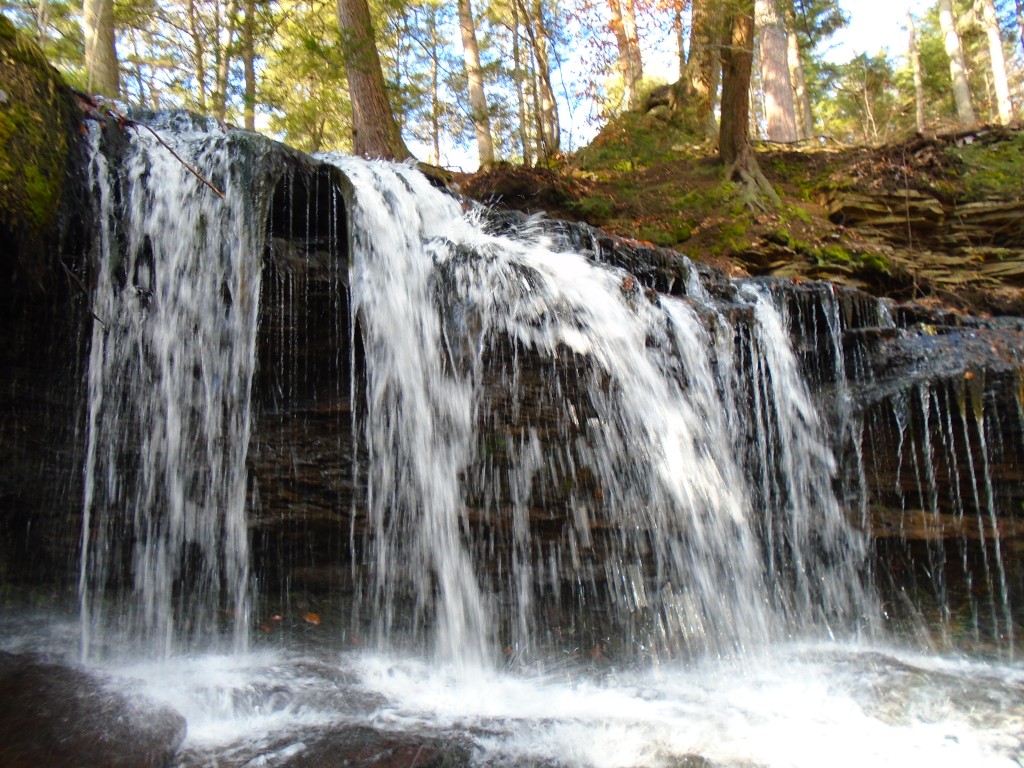 The park is just an hour west of Scranton, PA so we stopped there first to pick up some paper and consume the biggest breakfasts we could find. We chose Boulevard Diner for its unassuming, hole-in-the-wall exterior and rumors of awesome food. Take it from some New Jersey natives who know a thing or two about diners, this is an awesome place to fuel up before hitting the trails. 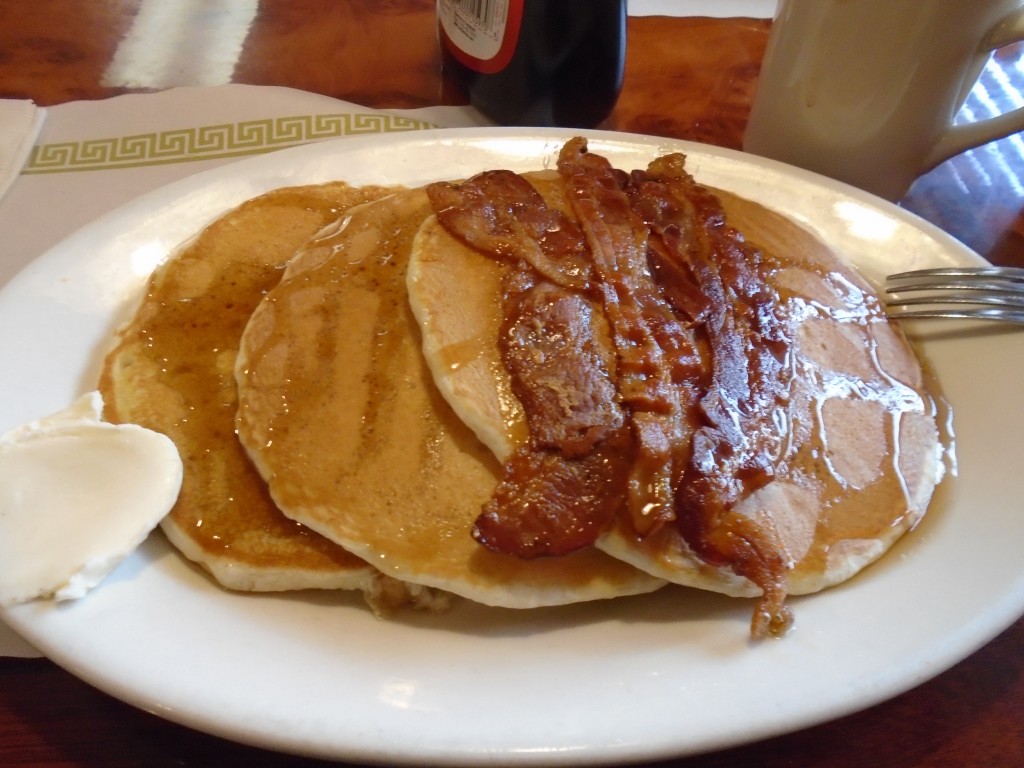 Invigorated by the supernatural powers of pancakes and bacon, we arrived at Ricketts Glen State Park ready to do some damage! From the Lake Rose parking lot, you get easy access to the Falls Trail which takes you along all of the park’s waterfalls. We didn’t find any paper maps or guides at the trailhead so here’s an official map of the Glens Natural Area. However, you honestly don’t need a map. The trails are impeccably marked and maintained – you could do the hike in absolute darkness with you eyes closed and still not get lost. 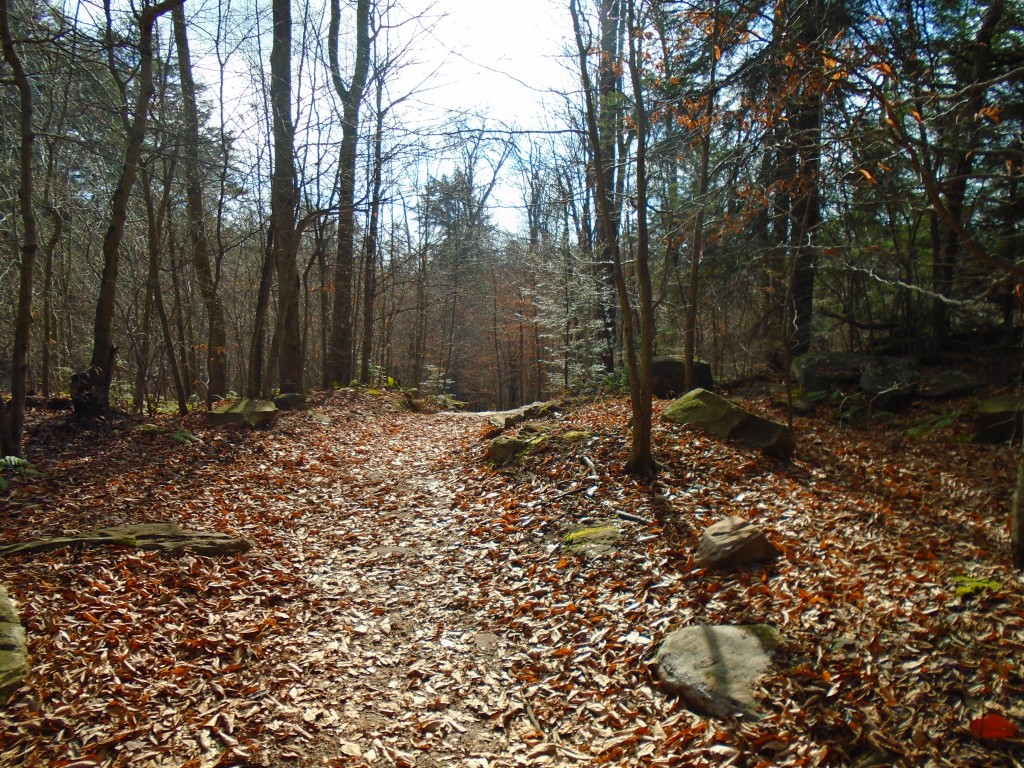 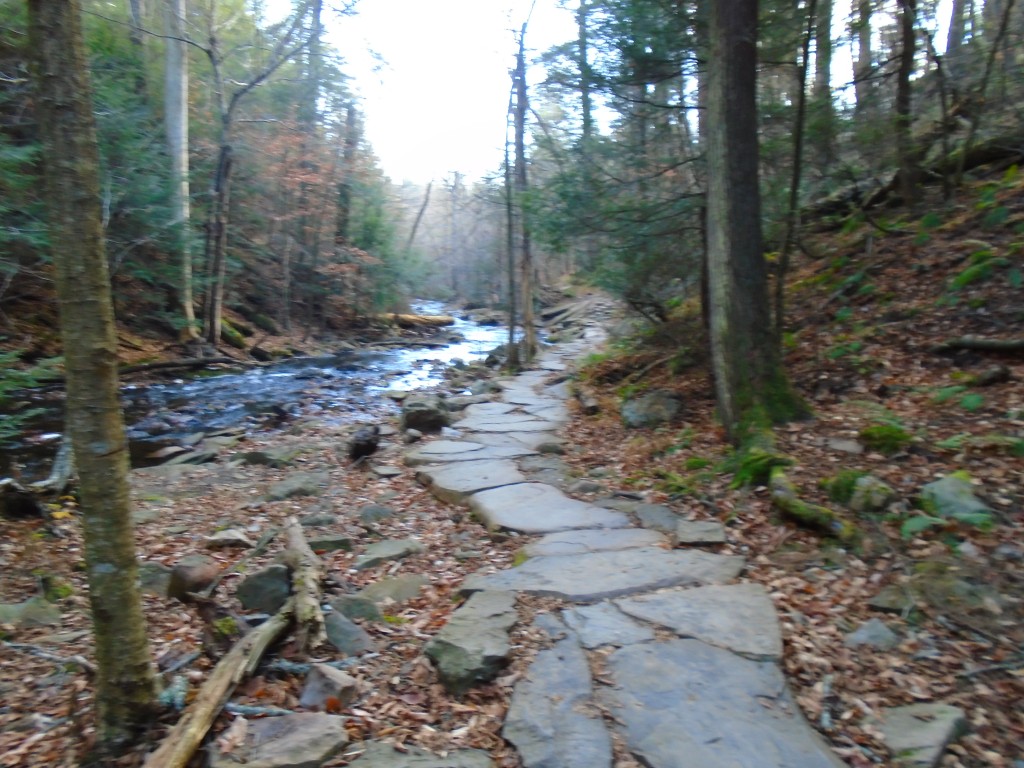 The falls range between 11 and 94 feet, each one an grand display of nature’s elegance and allure. We noticed most visitors tend to admire the falls from a distance so they can take every ounce of the splendor before them. We, on the other hand, got right up in there, standing as men, face-to-face with the waterfalls, looking Death straight in the eyes, and showing the world that fear should be the fuel for every adventure. 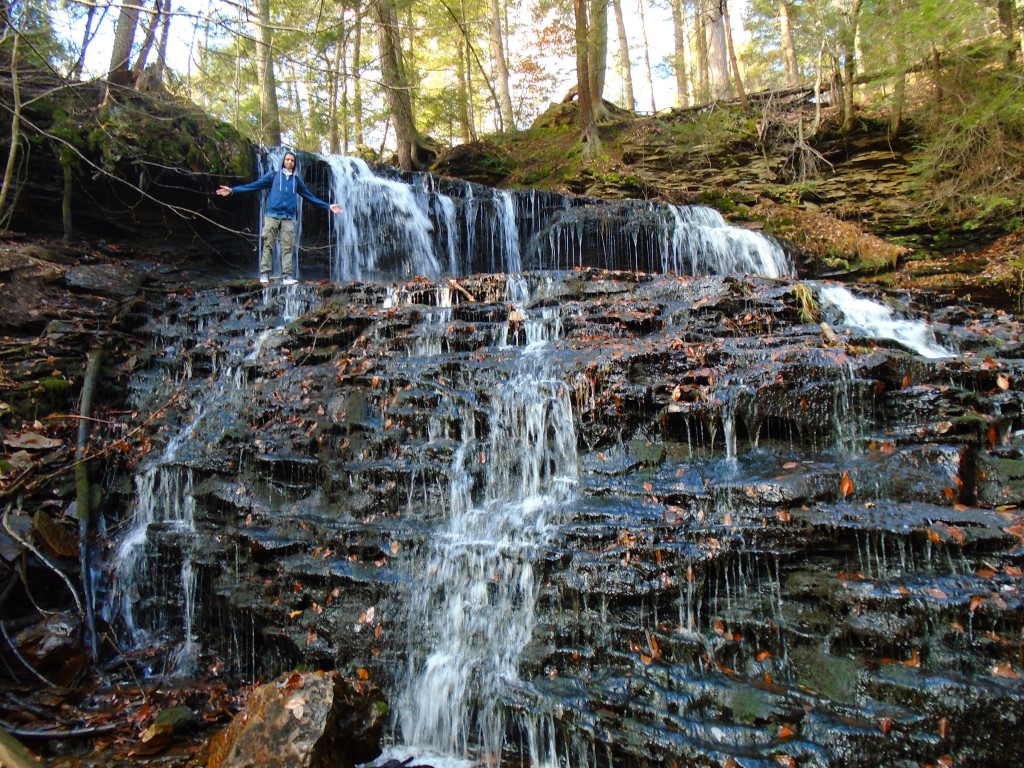 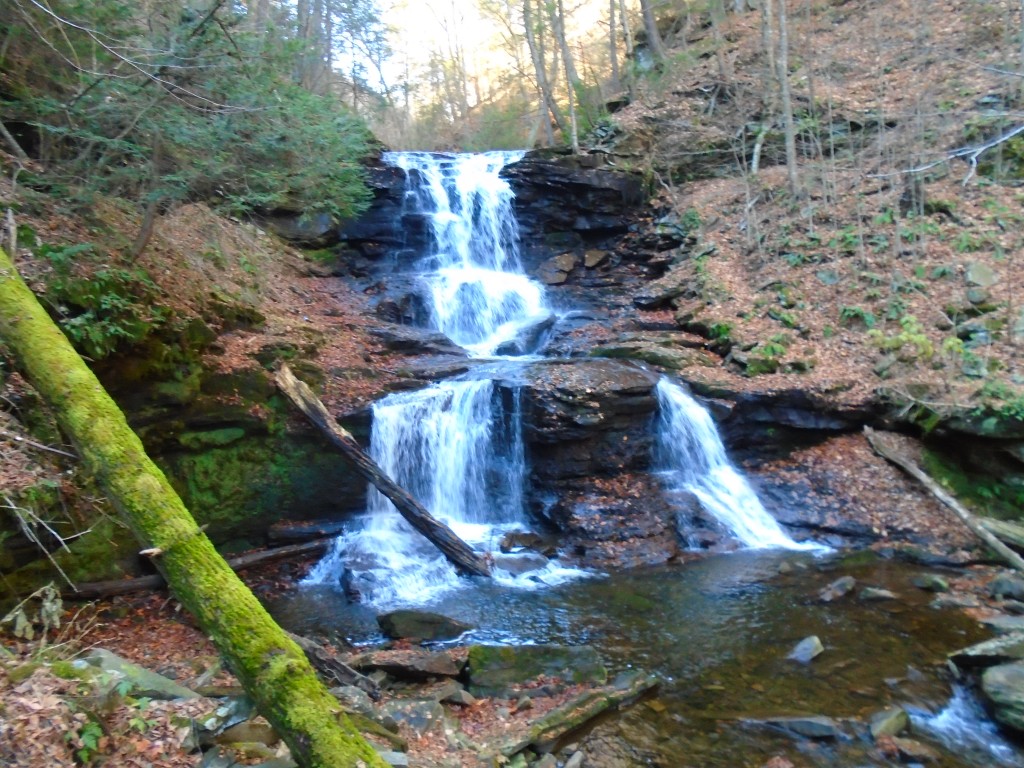 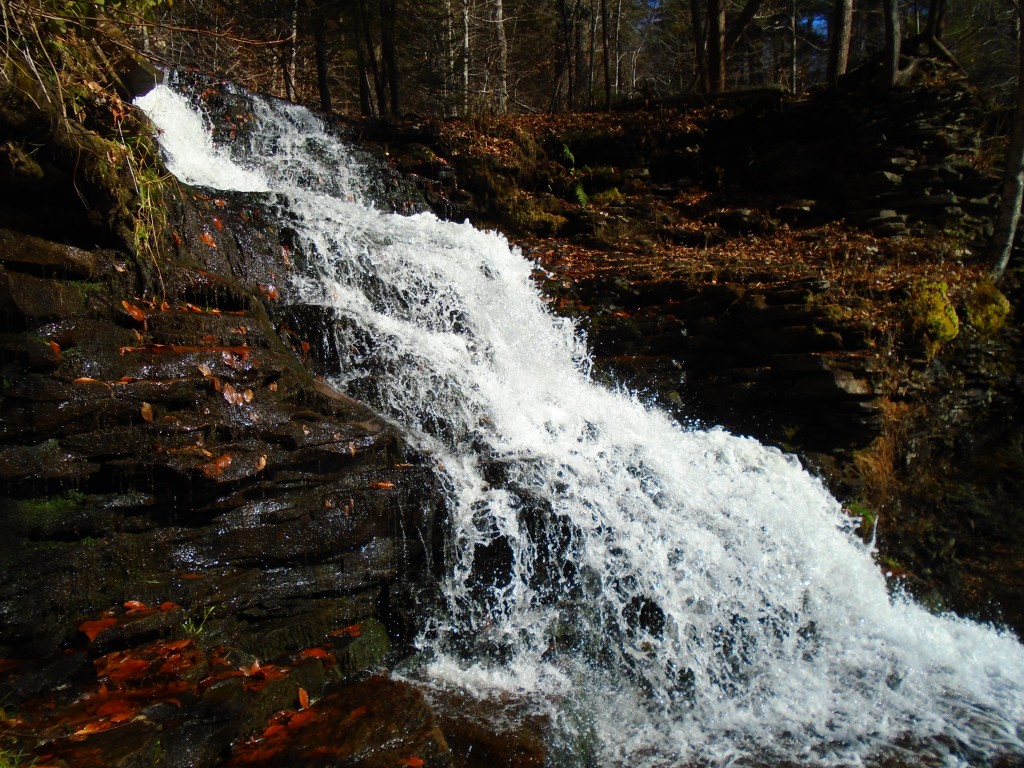 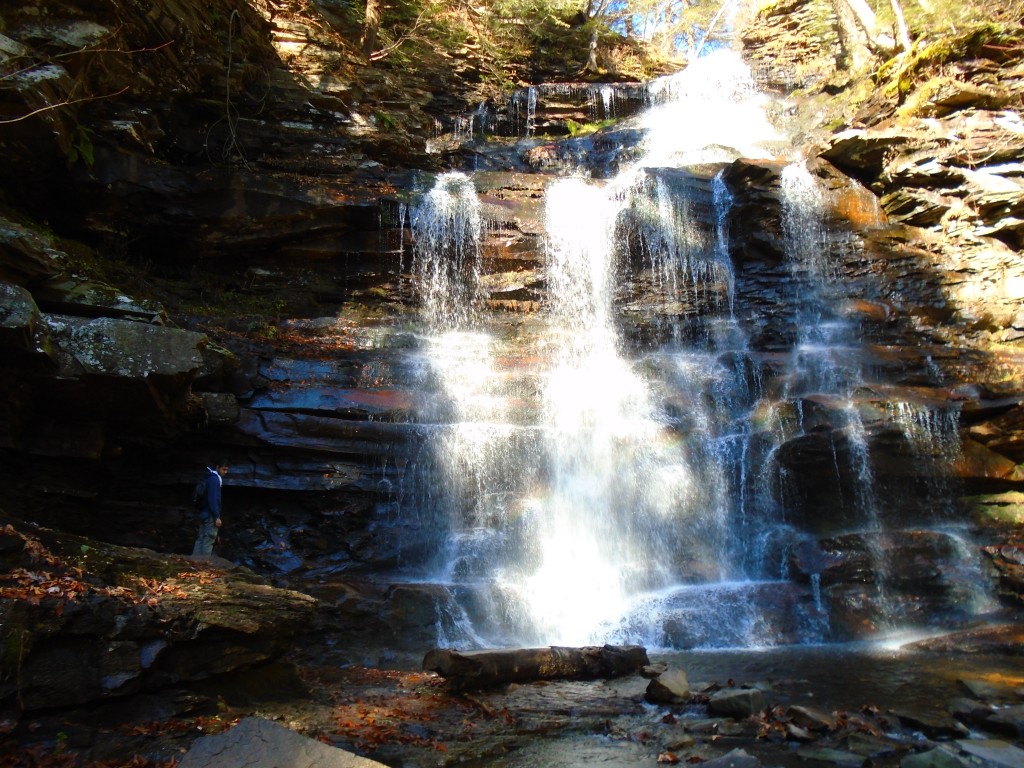 As we continued passed waterfall after waterfall, we realized how deeply we were descending into the mountains – a couple of hundred feet that you barely notice as you make your way along the trail. 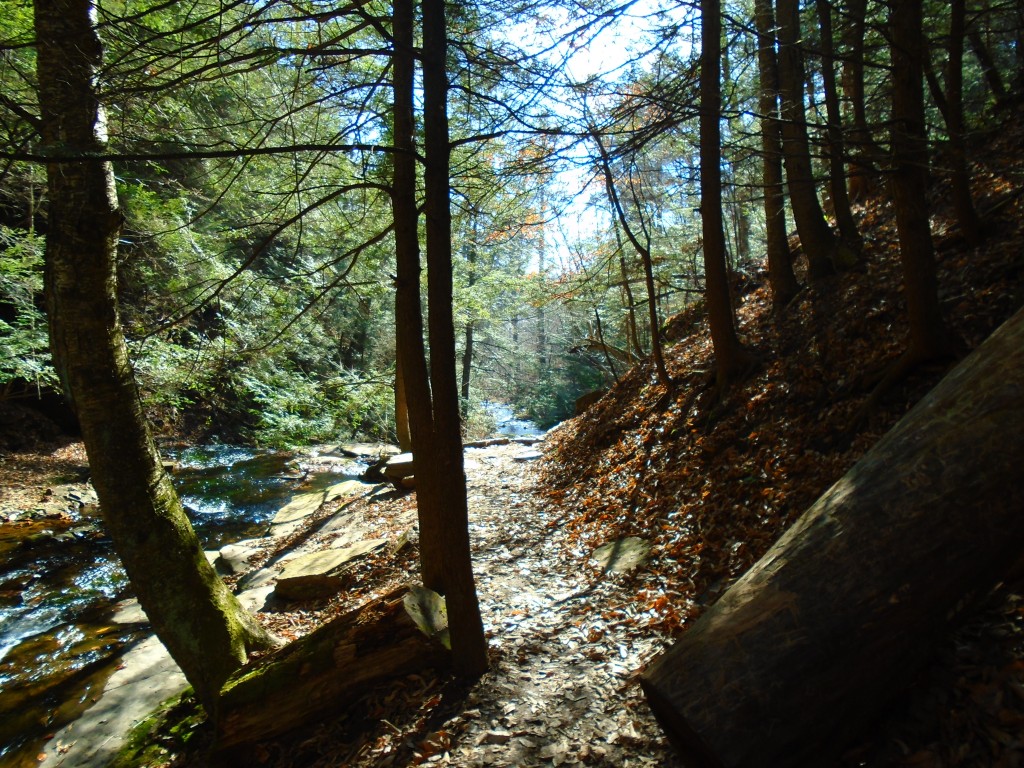 By far, the most impressive of the falls was Ganoga – the titan of Ricketts Glen. Standing at a gargantuan 94’, Ganoga took our breath away and it’s where we spent most of our time hanging out. Of course, to merely witness something is not enough; to be fully experienced, adventure must be felt, absorbed through both the eyes and the skin, and taken home as a part of your being. 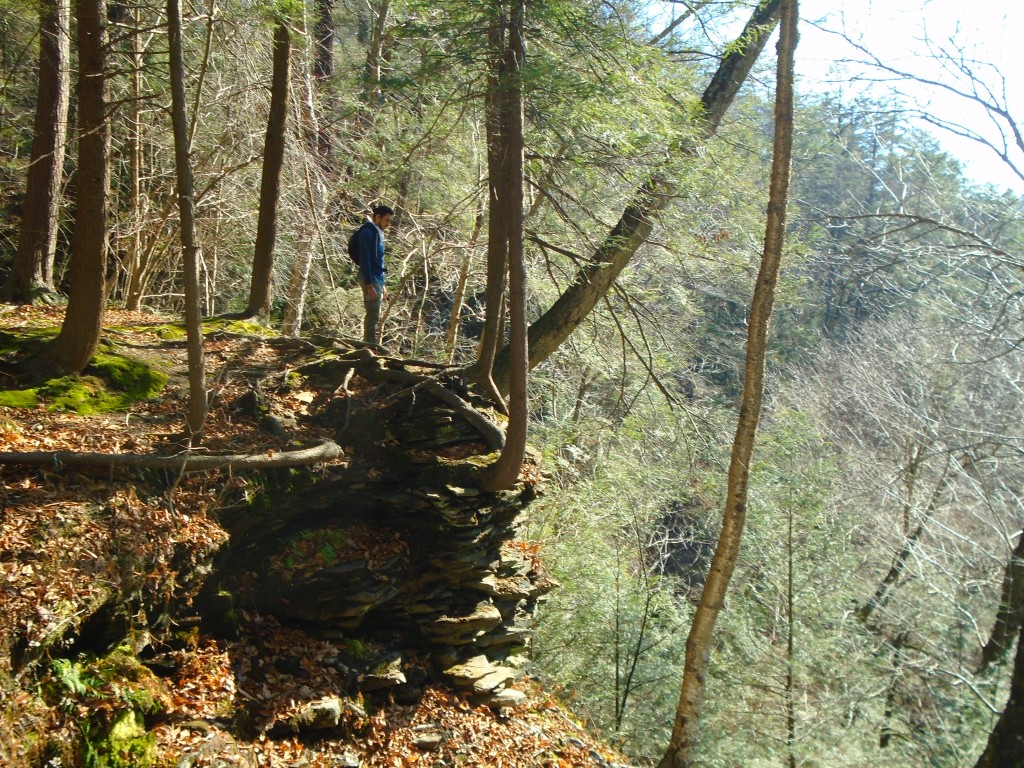 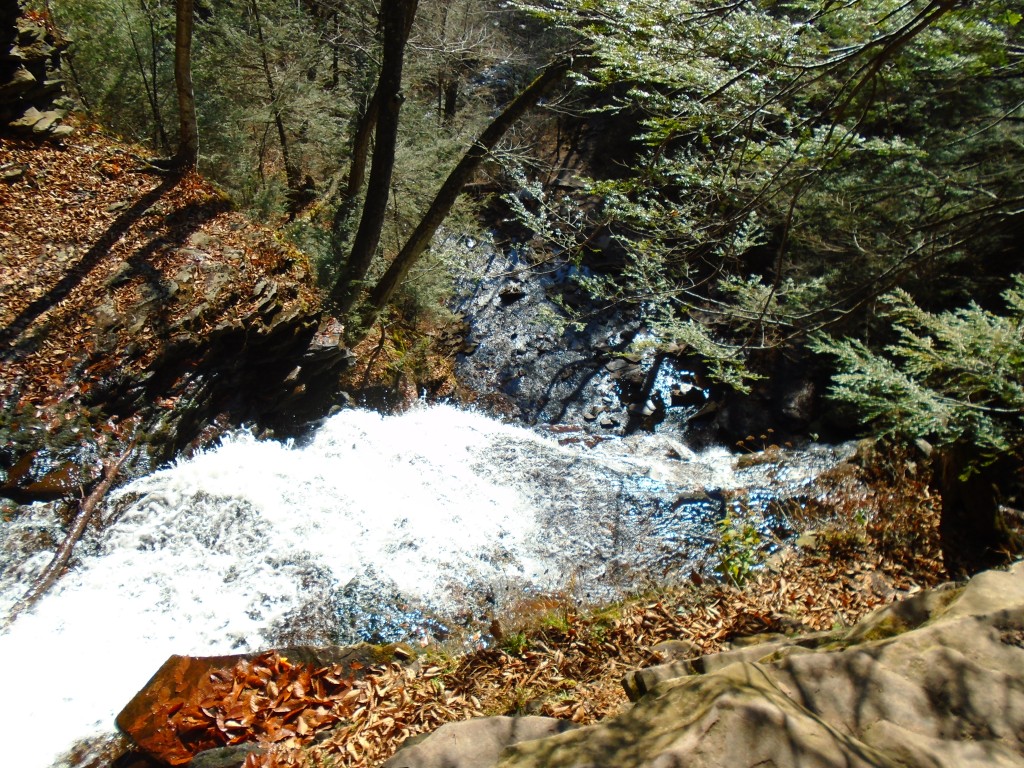 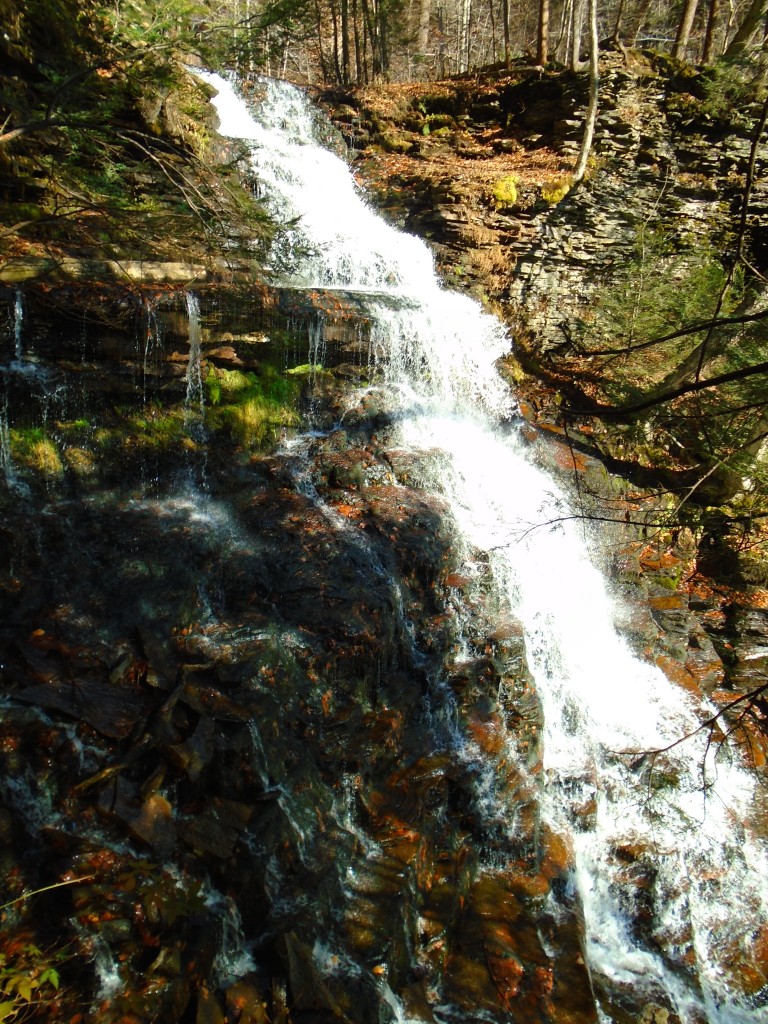 We saw more and more waterfalls until the excitement completely wore off and we left the park with only one thing on our minds: victory meal! At CavemanUnbound we conclude all of our adventures with beef and beer, so we left Ricketts Glen in search of the ultimate finale to an epic day in the woods. 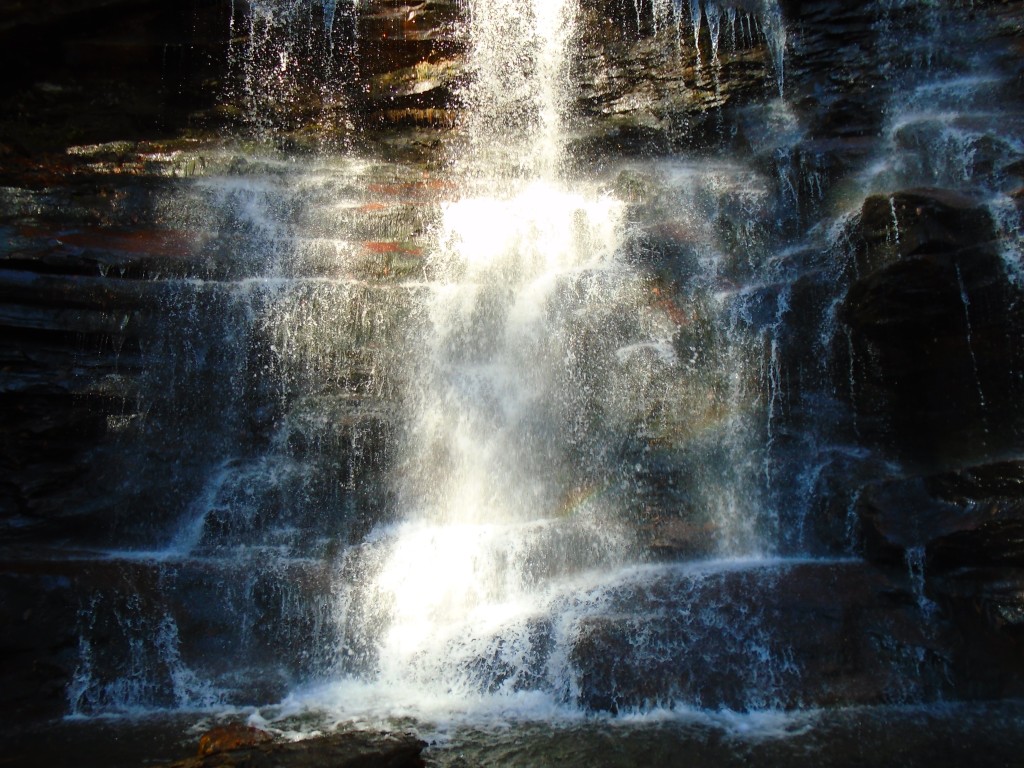 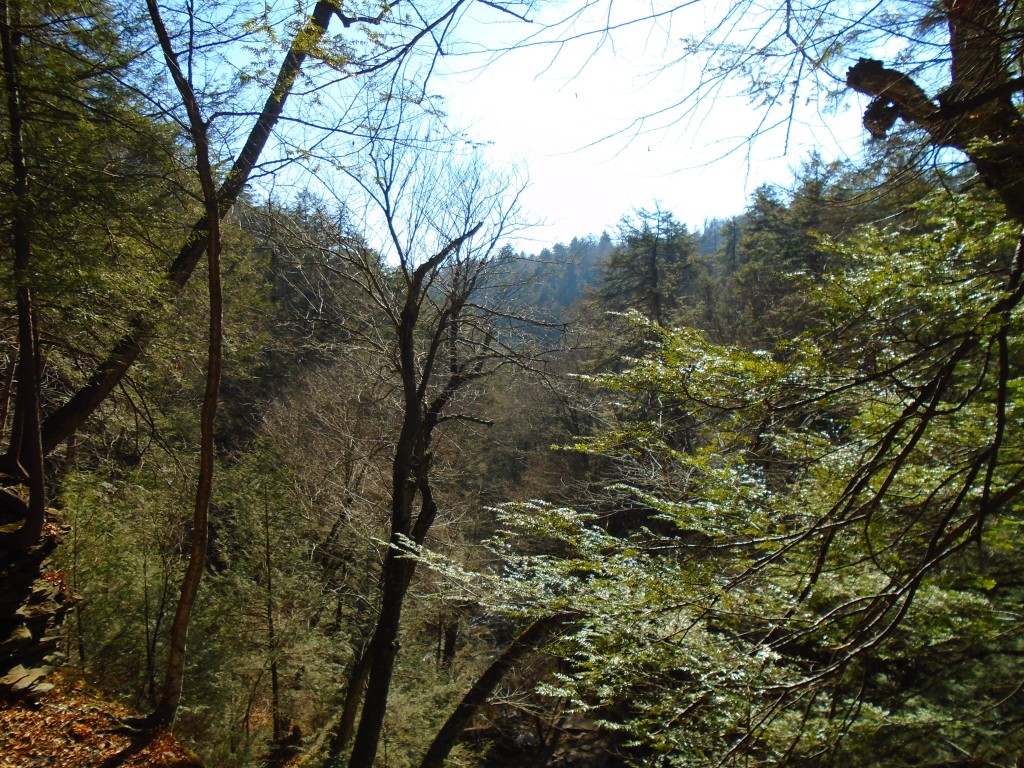 Arriving back in Scranton, we stopped at Market Street Bar & Grill for a championship dinner. We had yelped then entire Scranton area and found several places worthy of CavemanUnbound’s victory feast, but because it was a Tuesday, many places were close. It’s funny that Market Street was not our first choice for food, but it was the best decision we’ve ever made. To say the least, dining at Market Street Bar & Grill was a spiritual experience. The men who walked into that restaurant are not the same ones who came out of it.

The meal started with… wait for it… seriously, prepare yourself… bacon wrapped wings! That’s right, bacon wrapped wings! To this day I dream about these wings, which I can only assume were plucked directly from the back of the heavenliest of God’s angels. Each bite was an ineffable surge of pleasure and, sadly, I’ve realized that eating wings anywhere else would be nothing short of blasphemy. 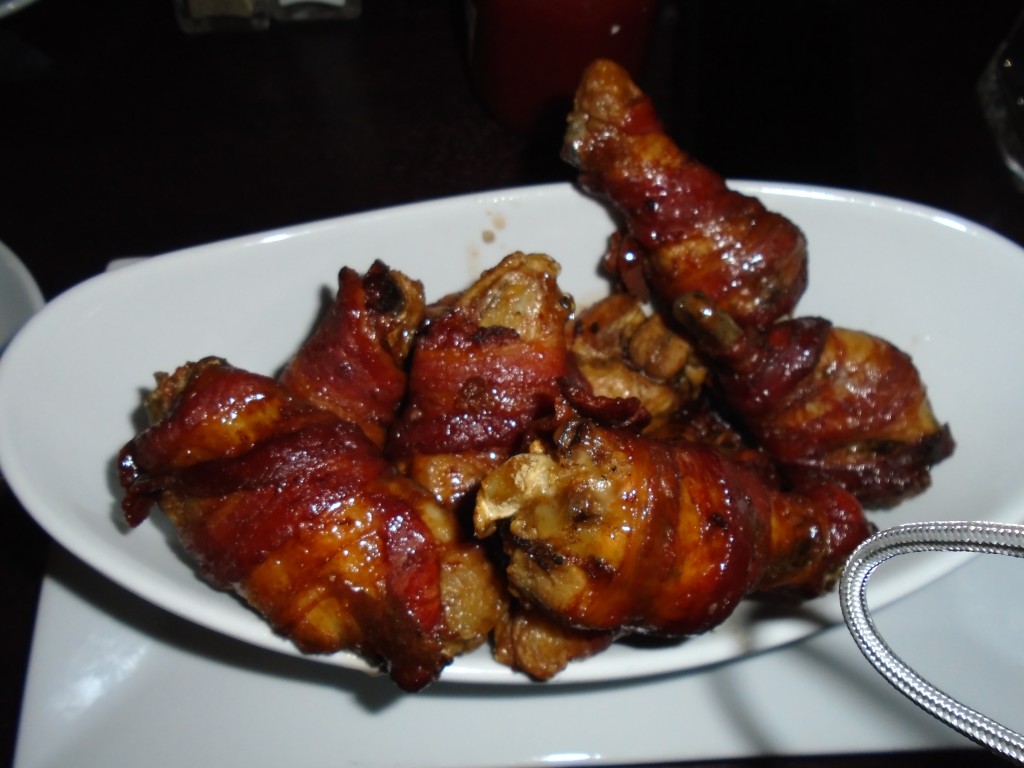 With the entrees we dove deeper into nirvana, sampling a symphony of flavors that took us to a higher level of existence than we’ve ever experienced before. The BELT burger paired with homemade tater-tots and the BBQ ribs were beyond the abilities of any normal chef, prompting us to wonder what mystical beings were working their powers of enchantment behind the kitchen doors. As we savored each morsel, we were the lords of all creation, commanding the heavens, the stars, and all that is good on Earth to join us in this celebration of life. 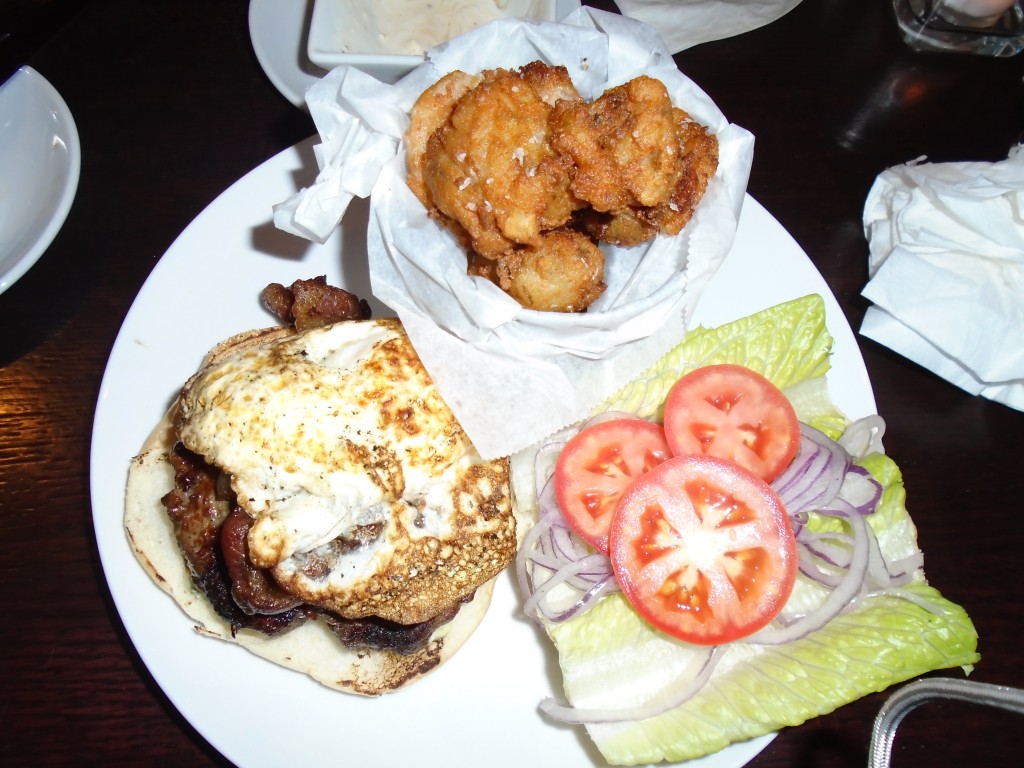 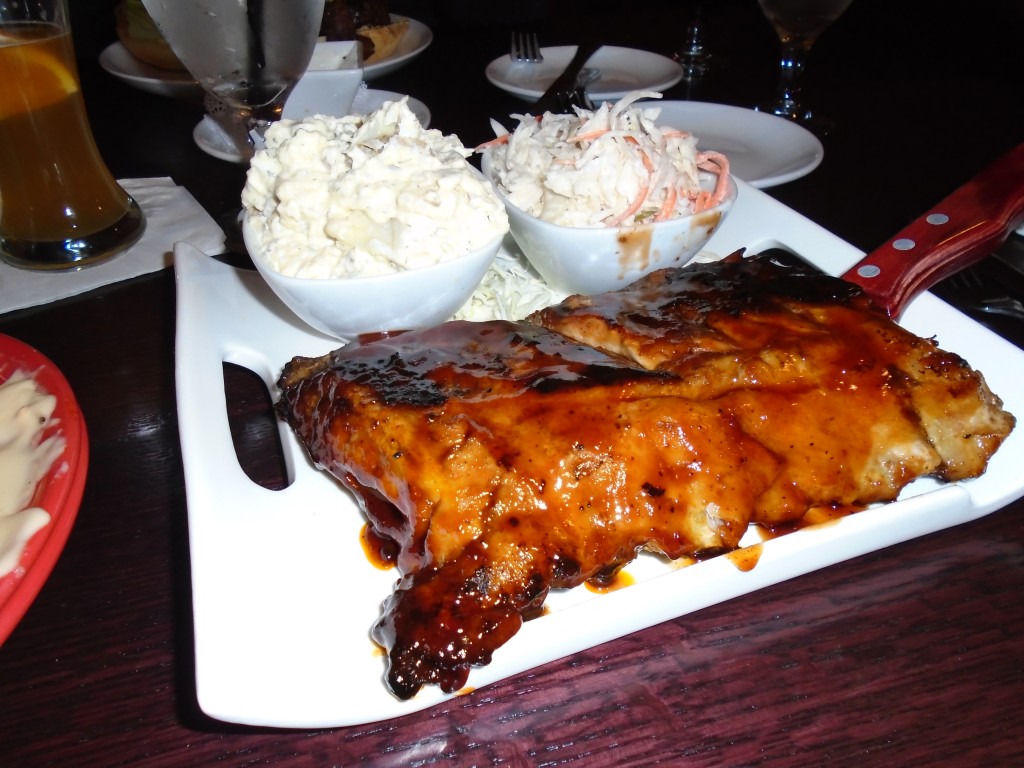 With this meal, we knew exactly what Dr. King, Jr. saw at the top of that mountain. It was the same thing that we’ve seen at the top of each mountain we’ve climbed: it was life acted out in absolute bliss, knowing well that our happiness far exceeded any darkness the world could throw at us and that nothing was strong enough to tarnish the moment. And so we drove home, knowing the promised land is just 2 hours away and that, once again, we carpéd the shit out this diem! 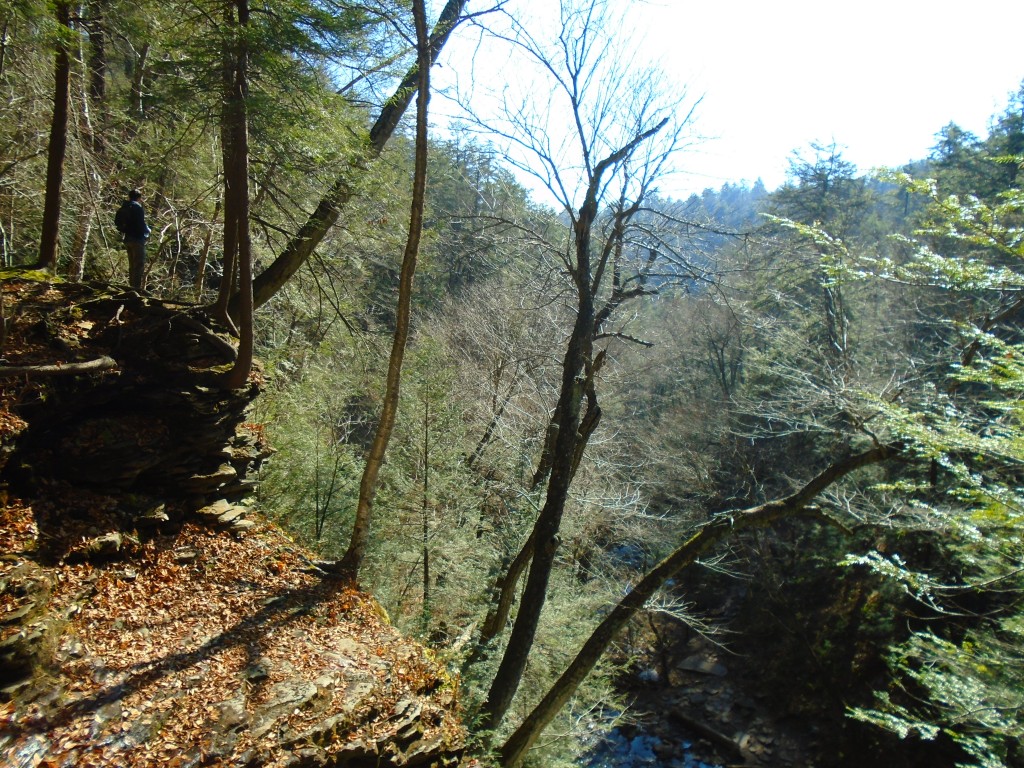