Though the Caveman prides himself on always being in control of every situation, he will at times find himself in predicaments that are beyond his reasoning and logic. Such dilemmas almost always involve women and they are commonly referred to as “crushes.”

As brutal and nerve-wrecking as they can be, every crush begins simply with attraction. You see a cute girl working at the coffee shop, riding the subway, or picking up groceries at the bodega and you immediately take a liking to her. You appreciate her solely for her appearance – the color and style of her hair; the outfit that tastefully accentuates her figure; the polite smile she offered as she brushed by you on her way out. Your physical attraction to her is what brings you back to that coffee shop every morning and to that bodega every Saturday – you’re just hoping to see her again. And, if you’re lucky, you do…

The next stage of your crush, infatuation, begins with the most mundane of occurrences: the cute barista called your name in a voice as irresistibly sweet as that of the Sirens; the girl who shares a subway car with you every morning just so happened to be reading Ayn Rand’s “Anthem” which just so happened to be your favorite book in high school; the girl waiting on line at the bodega is buying the very same juice that you are about to purchase. Suddenly, these trivial incidents take on a deeper meaning and you find yourself uncontrollably lost in thoughts of this girl being the future mother of your children. You find yourself wondering what she’s doing, where she’s going, and what her plans for the next 50 years are. You feel an instant connection to this person and after you’ve parted ways and continued on with your day, she continues to linger in your thoughts.

If you’ve reached this point in your crush – admit it now; this is a safe space – it’s time for you to take some action. You need to understand that you are not the only guy that has noticed her and you never know, if she isn’t already taken, how long you have before another guy steps up and makes his move. If you’ve realized that you just can’t get this girl off your mind, it’s time to do the unthinkable: approach her and actually talk to her.

To make sure you’re feeling confident, try polishing up your look that morning; maybe hit the gym for an early workout, or just listen to whatever tracks get you psyched and ready to take on the world. Whatever you do, though, don’t prepare an entire speech, or some lame opening/pick-up line or any silly antic to get her attention. Remember, she’s a person. The more you “perform” to impress her, the more you’ll just end up pushing her away. Just be yourself and be confident. Try a simple, “Hello,” and see where things go from there.

Though making initial contact with a girl is far from being the most difficult part of the crush, guys tend to let this phase stress them the most. Just do it. Once you’ve actually spoken to her, you’ll find it much easier to speak to her again, and again, and again. Keep speaking to her, even if it’s just for a single minute while you wait for your coffee or ride up the elevator. The more you engage your crush in conversation, even if it’s just small talk, the more comfortable she’ll begin to feel around you.

Now, it’s important to remember that as you continue talking to your crush (hopefully you’ve gotten her number by now and maybe even gone on a date or two), you’re going to either become totally disinterested or fall madly in love with her. Unfortunately, for guys, there is hardly ever an in-between. If you realize that you don’t like her as much as you though you did, then you’re safe from what’s to come. However, more than likely, you’ve probably started to feel an overwhelming amount of interest in her. If so, then you’ve got a full-blown, unstoppable crush. 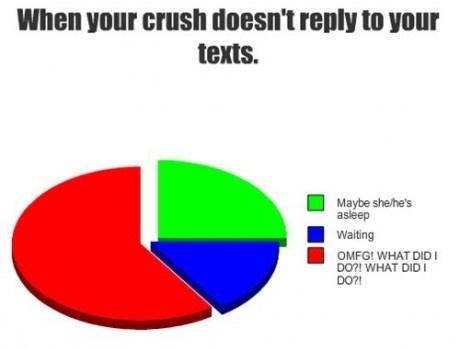 The signs of a true crush are unmistakable: your entire day in consumed with thoughts and daydreams of her; you wonder what she’s doing, who she’s doing it with, and why she still hasn’t texted you by 8:15 am. You constantly compliment her and think that everything she does is awesome. She becomes the most interesting person in the world – more fun than your bros or your family. She grabs all of your time and attention, even when she isn’t around. Your crush suddenly becomes the most perfect person you’ve ever met. You think about all the wonderful things you could do together. You’ve only known her for short period of time and you’re already picturing her raising your children, sitting on your lap at family BBQs and growing old by your side. You look for any reason to text her – any funny picture or video that will remind her of how hilarious and amazing and wonderful you are. When your phone rings, you immediately pray that it’s her and you bathe in sorrow when you see that it’s your mom calling to ask if you saw the baby pictures she posted on Facebook. Your FB statuses become meticulously measured sonnets that show your deep intellect and your Instagram feed becomes a carefully curated exhibit of avant-garde photography – and you giggle like a little girl when she likes or comments on them. Above all, the clearest sign of a crush is that you haven’t stopped thinking about her since you started reading this article.

While these responses to a crush are totally natural, there are some things you can and should avoid so you don’t push her away. First, don’t text her too much. Even though you’re crushing pretty hard, you don’t want to come off as desperate. If you immediately give yourself entirely up to her, it looks weak and unattractive. What arouses desire is the thrill of the chase, and no girl wants a guy who’s too easy to get. Second, don’t trip and lose your mind over her. You had a life before you met this girl and, believe it or not, your life will continue on with or without her. Don’t be so quick to put everything on pause just for a girl you’re crushing on. Keep busy, stay focused on your other goals and let things with this girl fall into place. Giving up your life for a crush isn’t worth it, Ted. Even if all you want is to be around her, you need to give her space and let her find you. If you smother and stalk her, she’s just going to be pushed away and you’ll feel like crap. Instead, just go about your life and show her that you’ve got other things going on too. Creating a balanced life between your crush and your other interests is vital for finding happiness in and out of the relationship. Of course, all of this is easier said than done and after you’ve ignored this advice you’ll inevitably find yourself at the point where the “crush” begins to embody the full meaning of its name.

Here is where you reach the fork in the road: either she becomes your girlfriend or you’re crushed by the unbearable weight of unreciprocated emotion. The pressure of this sudden, impulsive desire to be with someone can be overwhelming. It matters the world to you because it’s a weight that you can’t carry with brute strength alone. You’re heart has to do the heavy lifting and, for a lot of men, it’s often too much to carry. Because there are a staggering 7 billion people in the world, it is very unlikely that each girl you meet will be “the one.” Chances are that you will be crushed quite a few times before you find the right girl and live happily ever after.

Surviving the crush and moving on with your life is often the most difficult part of this entire ordeal. While it can be excruciatingly painful to understand and accept that she cannot return your emotions, it’s necessary to know that you’re grief has a shiny silver lining. While crushes usually end in terrible agony, the duration can be awesome and euphoric. Having a crush reminds you that you’re alive, human, and capable of emotion. It takes you out of your cold bitterness toward the world and makes sense of sunlight, rain, brunch, B&Bs, and all the other mushy crap you used to ignore while shunning the feelings that would occasionally stir inside you. A crush is never a sign of weakness; don’t feel embarrassed if you’re catching feelings for a girl. Instead, man up and go after her. Enjoy the chase and bask in the god-given liberty to pursue your desires. And, if it doesn’t work, you’re free to go out and meet someone new. You can go out and talk to a new girl and flirt a little and remind yourself that you’re awesome and that you will see another rainbow. So, if you’re crushing on a girl, then go after her; if it doesn’t work out, well, that’s what bars are for. 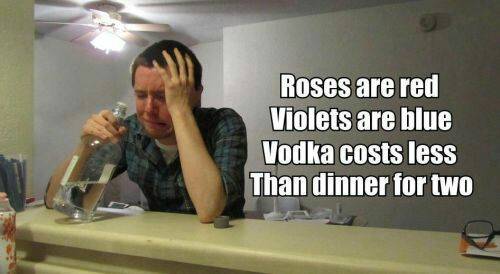